Williamsburg, Brooklyn, and why you should visit 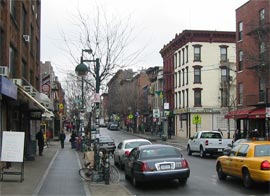 The majority of visitors to New York City have never even heard of Williamsburg, Brooklyn, and are probably just as well off skipping it on a short visit to the Big Apple. But if you are one of the many trend-conscious visitors to New York and you are wondering whether a trip just across the East River is worth you time, the answer is almost certainly yes.

It’s important to adjust your expectations to what you’ll actually find, but once you’ve done that you should have a great time. Williamsburg has become the ultra-trendy successor to the East Village, following in a long line of artsy areas that have gone from dumpy to insanely expensive in a relatively short time. Unlike the other areas fitting that description, all of which are in Manhattan, there is really nothing flashy about Williamsburg, and it’s very common for excited visitors to think they are in the wrong place even as they emerge from the subway in the heart of the district.

What to expect in Williamsburg

The epicenter of everything has always been and will always be the modest intersection of Bedford Avenue and 7th Street, which is where the first subway stop on the L line outside of Manhattan is located. Once you walk up the stairs toward the back of the subway carriage (there is no elevator) you’ll find yourself 20 yards from a modest and unimportant looking intersection. You are now at Bedford and 7th Street, and suddenly wondering what all the fuss is about. If you walk up the stairs toward the front of the carriage you’ll be at Driggs and 7th, so walk up the stairs behind you for the best effect.

After you start poking around you’ll begin to see what makes this neighborhood special, but prepare to be underwhelmed at first. Aside from the army of trendy counter-culture types all wearing more or less the same anti-uniforms, this area looks like hundreds of other random New York City neighborhoods.

The highest concentration of cool shops, bars, and restaurants are on Bedford itself, and in about a 3-block radius in each direction from the subway stop. Walk down Bedford to 6th Street and then turn right and check out those two blocks in front of you. You’ll see a really interesting collection of some of the more established businesses that are part of the wave that made Williamsburg a destination unto itself.

What to do in Williamsburg 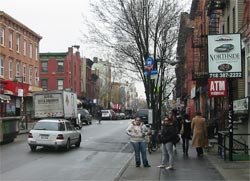 There are scores of cool little shops and boutiques, mostly specializing in affordable fashion and things that appeal to 20-something hipsters, and they (unfortunately) come and go so often it’s hard to keep track of them. There are a couple dozen bars, a few of which have live music at least at times, and there are dozens of restaurants, most of which specialize in lighter and inventive cuisines, and at prices that are usually surprisingly affordable. If you are in New York for only a short time this area is worth one afternoon or one evening, and plan on having a meal and a few drinks if you can. You’ll probably want to move there midway through your first visit because it looks like it should be cheap, but it’s definitely not. Apartments in New York City range from expensive to totally outrageous, and this is the trendiest area that isn’t actually in Manhattan.

Finding out what’s happening in Williamsburg

There are two excellent resources for finding out about nightlife events and restaurant openings and such. One is Time Out New York magazine, which you should get when you arrive in NYC for sure, and it’s the best $3.99 you’ll spend on your trip. The other is L Magazine, which is smaller and available free in newsboxes in lower Manhattan and in Williamsburg itself. It’s almost as good as Time Out when it comes to listings, and it’s nicely designed and written, and easier to carry too.

If you want to waste a bunch of money you could take a taxi to Williamsburg, but it’s a circuitous route and some cab drivers will refuse to take you because finding rides back into Manhattan can be challenging. Do yourself a favor and figure out the New York City public transportation system, and take the subway. You’ll want to get to the L line, which runs along 14th Street in Manhattan, and the first stop in Brooklyn is the aforementioned Bedford Avenue stop. You can literally be in the East Village one minute and in the center of Williamsburg less than 10 minutes later.