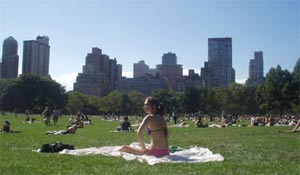 New York City has four distinct seasons, and fortunately the depths of winter and the peak of summer will rarely interrupt anyone’s visit in any significant way. The winters can get pretty extreme outside of the city itself, but the fact that NYC is surrounded by New York Harbor keeps things fairly moderate.

The city does get wet, but the overall rainfall pattern is spread out almost evenly throughout the year. New York City averages about 46 inches (1.12 meters) of precipitation annually, but the difference between the driest month (February – 3.3 inches) and the wettest month (November – 4.5 inches) is so slight that it’s not worth worrying about.

This is mostly an indoor city, and with the excellent subway systems just beneath your feet, you are never more than a quick dash from cover at any time. You can bring an umbrella if you like, but when it starts to rain, sidewalk vendors with cheap umbrellas (usually $5, sometimes only $3) appear magically. These cheapo umbrellas won’t last forever, but they’ll usually last for the rest of your trip, unless it’s extremely windy.

January is the coldest month, with an average high temperature of 38 °F (3 °C) and an average low of 25 °F (-4 °C), but the real conditions tend to vary widely. Days of 60 °F (16 °C) are not too uncommon some years, while stretches where it never rises above 30 °F (-1 °C) for two weeks at a time are also not unheard of. Snowfall is equally unpredictable and comes in bunches. Once every few years there will be a storm that leaves 2 feet (.64 meters) of snow on the ground, but by the next day it will be cleared from the sidewalks and main streets of Manhattan (although not the outer boroughs). There is always so much car and foot traffic in Manhattan that snow doesn’t stand a chance for long, and while it’s fresh it can be stunningly beautiful.

April averages 61 °F (15 °C) for a high and 44 °F (7 °C) for a low, but again, it’s fairly unpredictable. April and May are great months to visit since snow is usually over and hot muggy days have yet to begin. Of course, it can always rain, so you just take your chances no matter when you come.

In many ways summer can be the worst season in New York City. Every building must have adequate heat in winter, by law, but air conditioning is optional. Virtually every business has A/C, but some of the cheapest hotels don’t have it, and this can be miserable. July is the hottest month with 85 °F (29 °C) as an average high and 68 °F (20 °C) as an average low. The weather is often glorious, but it’s just as often hot and very humid. During the days it’s not so bad, but when it’s still blazing hot and super muggy at night when you are trying to sleep, it can be hell.

Many New Yorkers think autumn is the nicest season of all in the city, but it’s really just a repeat of spring, in reverse, of course. October and November are very much like April and May in that rain is always a possibility, but the other extremes are in hiding for a while. The famous store displays and Christmas decorations are huge highlights of autumn in New York City, and crowds are way down from summer.