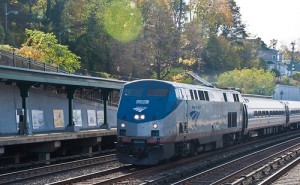 Just like bus travel in New York , train travel takes time, but it’s quicker than traveling by bus. However, it’s more expensive to travel by train than by bus and even by plane. Train travel offers flexibility and there are no delays due to the traffic. You’ve got plenty of room to move around and the food service is good. And just like buses, you don’t need to worry about getting from the airport to the city, as trains stop in the city.

It’s not possible to reserve a seat on commuter trains. You need to get to the station early to grab a seat, especially during the peak hours. There are discounts offered for commuter trains if you travel during off-peak hours and weekends. These trains don’t have checked luggage facilities.

When boarding Amtrak trains you might be required to show a photo ID. It’s possible – and sometimes required – to reserve a seat on Amtrak trains.

On long distance trains there is food service but you are also allowed to bring your own food and non-alcoholic beverages.

Getting to New York by train

The national train service, Amtrak , operates from New York Penn Station, directly under Madison Square Garden. It’s a good idea to make a reservation online or via phone especially if you plan to take a popular train, at peak hours.

Amtrak’s Acela express train offers regular fast commuter service between major cities on the East Coast – Boston, Philadelphia, Washington D.C. – and New York. You can take the Amtrak train from Florida all the way up to New York, along the coast. And you can also get to New York from California but you’ll spend 3 days on the train and have to change trains in Chicago.

It is also possible to get from Canada (Montreal and Toronto) to New York, but these fares are often more expensive than choosing a fly (especially from a low cost carrier).

PATH (Port Authority Trans-Hudson) is a subway type of system, connecting New York City to Hoboken, Newark, and various points on the New Jersey shore of the Hudson River. Two lines enter the city, one terminating near the World Trade Center site downtown, the other at 33rd Street in midtown.

The system can be used to travel within Manhattan, although it’s useful if you have to travel to different parts of the city. Still, it’s cheaper than the subway. The fares are $1.75 per trip. The system also accepts the Pay-Per-Ride MetroCard.