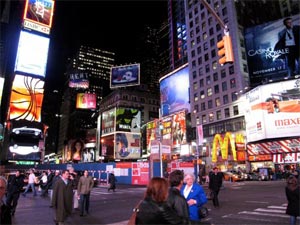 One of the most famous intersections in the world, Times Square is the absolute heart of New York City’s tourism industry, but that doesn’t mean you should stay there yourself. Well over half of New York City’s hotels are within half a mile or so of Times Square, but depending on your goals it could be the ideal location for your stay or your worst nightmare.

A bit of history

Times Square, as mentioned, isn’t a square but is rather an intersection of Seventh Avenue and Broadway, which runs diagonally through parts of Manhattan creating some oversized street crossings. The name comes from the Times Building, which is the former offices of the famed New York Times.

Even as recently as the 1980s, Times Square was filled with low-rent strip clubs and adult movie theaters where admission was gained with a roll of quarters. The area was also filled with various lowlifes and hoodlums that gave the neighborhood an “edgy” reputation, to put it kindly. But things have changed in a big way. Many people decry what they call the “Disneyfication” of Times Square, but trust us, it’s a million times better than it used to be.

Yes, there is a Disney Store in Times Square, as well as dozens of other chain shops and restaurants. Most of those chain stores and restaurants make seasoned travelers cringe – Bubba Gump Shrimp for example – but they are professionally designed and well run so they give the area something of a theme park feeling.

The sidewalks are packed with tourists, locals, and street vendors almost around the clock. Regardless of where you stay in New York City, you should plan on visiting Times Square at least once during the day and also again at night. The enormous signs and millions of lights have only grown more impressive each year, and especially after dark, it’s a stunning sight even if you’ve seen it once before.

The area contains virtually all of the Broadway theaters in New York City, but only a couple of them are actually on Broadway. You can buy tickets for most of the shows right from their ticket booths, which are open during the day, but you can also buy half-price tickets from the famous TKTS booth for shows on the same day if there are still plenty of tickets available.

ABC Television broadcast’s their morning chat show, Good Morning America, from their studio overlooking Times Square each weekday. This draws a big crowd every morning, but not usually as bad as when MTV Studios has a pre-announced special guest on one of their live shows. Their main broadcast facility is on the second floor overlooking Broadway and when pop stars are in the studio it’s gotten so bad that police have nearly had to shut down Times Square to cars just to clear the area. MTV has been asked not to do that anymore, so this happens far less frequently these days.

It might be the most famous New Year’s Eve party on the planet, but it’s debatable whether the reality lives up to the hype. Even in frigid weather, many hundreds of thousands of people cram into the giant intersection to try to watch the ball drop. This is the sort of thing that people often like to do once, just to say that they’ve done it, but the reality is that it’s kind of a drag. In order to be anywhere near the ball you have to arrive in the morning and then stand there all day to hold your place.

Alcohol is not allowed to be consumed in public, and many thousands of police do their best to enforce this policy. If you try to get to the area at, say, 11 p.m., you’ll find most of the streets blocked off by police barriers, and the closest you’ll end up getting is far out of view of the ball and probably half a mile away. You’ll still be sandwiched between thousands of other late-arrivers, and a community celebration will always be memorable, but it takes serious commitment to do NYE in Times Square and there are a lot of ways to be disappointed.