Things To Do In Brooklyn

Nobody puts Brooklyn in the corner. With over 30 neighborhoods, the borough that may lie in Manhattan’s shadow explodes with culture, diversity and a big helping of New York chutzpah! It’s time for visitors to cross the bridge to a healthy of dose of fresh food, vibrant arts and a cacophony of diversity…Welcome to the BK. 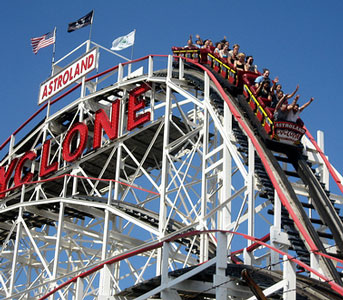 An emblem of New York beach goers since it became a resort after the Civil War when railroads navigated their way to Brooklyn’s southernmost shores. Even though the strip’s most majestic years may have come to pass, visitors can still revel in Coney Island’s infamous nostalgia.

The most famous attractions, like the wood-tracked Cyclone rollercoaster, parachute jump and Wonder Wheel can still take riders for spin. Also, summer beachgoers can head to the boardwalk to catch Nathan’s Famous Hot Dog eating contest on July 4th, or the alternative Mermaid Parade celebrating the start of the summer season, where participants dress in sea-themed, often perilously sexy costumes.

A must for any visitor. When it opened in 1883, the Brooklyn Bridge was the world’s largest suspension bridge. Designed by John Roebling, the construction was thirteen years in the making, but well worth the wait. Lying south of the Williamsburg and Manhattan bridges, the bridge is the closest to the East River’s convergence with New York Harbor.

On the Manhattan side, pedestrians must head to the ramp by City Hall leading to a promenade urban fantasies are made of. It will take about an hour to cross the mile long pathway, and when you reach the Brooklyn side, amblers can continue to the Brooklyn Heights Promenade to view the behemoth structure combined with the spires of the downtown Manhattan. 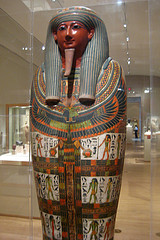 The second largest museum in New York, the Brooklyn Museum of Art holds 1.5 million pieces of art from ancient Egyptian works to contemporary art. Its permanent collection also includes Classical and Ancient Middle Eastern Art, Arts of Africa, the Pacific and the Americas.

They have installed 28 period rooms and feature an extensive selection of American paintings. The museum’s Gallery/Studio Program offers a series of challenging studio art courses for students ages six to adult. Participants develop art skills through studying the museum’s collections and special exhibitions and experimenting with materials and creative techniques in hands-on classes.

And on the first Saturday of each month, the museum hosts its popular free evening of art, dance, music, film screenings and readings starting at 6pm. 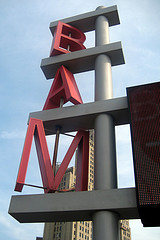 Since unlocking its doors in 1861, the Brooklyn Academy of Music boasts avante-garde performances that have included shows by Isadora Duncan, John Cage, Vanessa Redgrave and Bill T. Jones.

Its cavernous opera house holds over 2,100 seats, while a second theater contains about 850 and a third, more intimate theater is underway. Patrons can also hang at the BAM café with some good bites and music. Visitors can also check out BAM’s 46 foot proscenium that has seen the likes of highly sophisticated sets, as well the Brownstone Books outpost and BAM Rose Cinemas; a movie house that runs art-house films and first showings.

One of BAM’s most prominent events, the Next Wave Festival, highlights established and experimental smorgasbord of dance groups that continue to dither between the uncertain and the risqué. 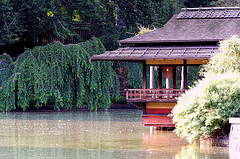 While visitors are welcome any time of year, come spring this 50-acres becomes a blossoming wonderland. A mash of lilies and tulip beds line the path to “Daffodil Hill.”

A little further lies a wooden teahouse beside an emerald pond with a blazing red torii gate near the far shore. This is the Japanese Garden. If it’s April, move on the cherry esplanade…but in June, it’s time for the perfume of budding petals in the Rose Garden. While smaller than it’s Bronx counterpart, illuminated greenhouses, bonsai and a charming al fresco café can round-off your rendezvous. 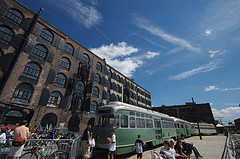 Just a few years ago, Red Hook was considered a longshoreman wasteland of the industrial times past. Fast forward to 2009, the movement of artist arrivals in the 70s and 80s and let the revolution begin!

Now, visitors can sweep through Red Hook’s assorted galleries and antique shops on Van Brunt Street or grab a bite on the peninsula’s burgeoning restaurant row. The view from Valentino’s Park and Pier grabs a picture perfect snapshot of the New York Harbor and the Statue of Liberty. But beware, even if the cobble stone streets add authentic charm to a region, the growing pockets of bustling streets, a rise in residents and a new IKEA may foreshadow a “Walmart-ization” to come.

A Slice of Brooklyn – And We’re Not Just Talking Pizza! 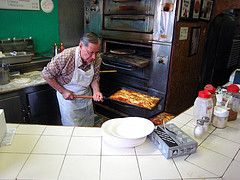 If you don’t have a lot of time, this four and half hour expedition maybe your best bet. The tour includes some of the city’s most memorable movie locations, famous landmarks and the best of New York’s true staple, pizza.

The voyage gives visitors lessons in Kings County history and a historical lessons to Coney Island, the Brooklyn Bridge and the million dollar homes along the picturesque Shore Road in Bay Ridge. 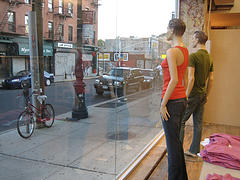 Think Alphabet City 15 years ago, but minus the grime and crime. Smith Street’s unique charm is still unlike the gentrified Williamsburg or yuppiesque DUMBO.

Nestled in the Carroll Gardens, Smith Street is home to Brooklyn’s restaurant row, fashionable boutiques, gourmet shops and fun watering holes – Perhaps making this street one of the chicest corridors in the borough. In order to stumble on all this road has to offer, its best for visitors to start on Baltic Street and walk south along Smith.

>> More things to do in Brooklyn