True to name, the New Museum states its mission simply: “New Art. New Ideas.” Targeted towards a hip young crowd but welcoming all ages and demographics, the New Museum is an odd building architecturally that boasts its status as NYC’s only museum devoted exclusively to contemporary art. 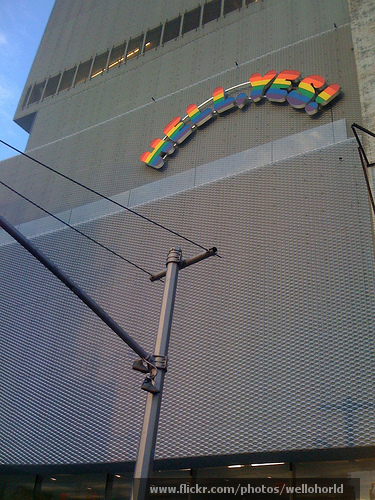 Because of its targeted demographic, the literally new New Museum, which just opened in 2007, has been getting a bit of a reputation for being risky with its selections, exhibiting what some may consider to be very strange choices for representations of contemporary art. However, that is exactly what the museum is going for, new. They don’t want to be showing the same conventional art that you can find in any other museum in NYC and therefore you won’t find it here. So what will you find?

The New Museum exhibits all kinds of media, sculpture, photography, paintings, video, etc. all the same kinds of mediums you’ll find in other museums. But it’s the content that is contemporary. There are no Picasso’s or Van Gogh’s scattered amongst the ranks here like you’ll find in the Museum of Modern Art. In fact, you may not recognize a single name of any artist being exhibited here. But that’s the point people! NEW! Is it getting redundant yet?

Other than just exhibiting new and living artists, the museum is taking unprecedented action in their curation as well. In October of 2009, they are having an exhibit where they are allowing an up and coming artist named Urs Fischer to take over the entire museum with the last four years of his work. Not only are they handing over the keys and all gallery space to a single artist but to an artist who has never even had a solo show in America before! That is… novel! 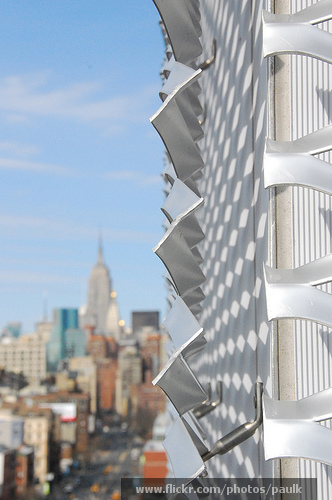 The building itself is also worth going to see. With its unconventional blocks-piled-on-top-of-one-another style, foggy white complexion, and rainbow “HELL YES!” slogan, it certainly stands out amongst the older brick buildings surrounding it. And on top of that, there is a seventh floor panoramic Sky Room that’s open only on the weekends but has pretty good views of the surrounding area. And speaking of opening times, the museum itself is never open before noon, obviously catering to more of a late-rising crowd, so if you’re a morning person, make sure it’s a long breakfast before heading over in this direction.

In conclusion, if you’re bored of the same old museums, the same names, the same art, or you’re just curious about this change of pace that these young hipsters are going so crazy over, then definitely take a trip to the New Museum. Best part? It’s one of the only new things in NYC that’s actually still pretty cheap!