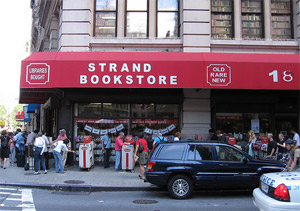 There are hundreds of bookstores in New York City, including dozens of used bookstores (although the number is probably shrinking regularly, just like everywhere else), but the only used bookstore that qualifies as a genuine tourist attraction is Strand Bookstore. They advertise themselves as having “18 miles of books” and it’s hard to say whether that’s accurate or not, but it’s definitely huge, and jammed with books, both new and used.

What makes Strand Bookstore so special

There are Barnes & Nobles all over the city, and the original (and largest) one is less than a mile away, but those stores and other chains are virtually identical inside. Strand Books is independent and unique, although they’ve recently opened two smaller stores in Manhattan that share the same general vibe. There are over 200 employees, and virtually every one of them is a hardcore book lover, so if they can’t answer your question on the fly, chances are they will know someone within shouting distance who can. The care and customer service here is in another league from chain bookstores, especially if you are looking for something unusual.

The other thing that makes it so amazing, and this is something they can’t actually advertise themselves, is that they sell reviewers copies of books as used, for half the new price. Since New York City has such a huge community of book reviewers (and people who work in the publishing industry who have access to these promotional copies) it means many of the newest and hottest titles in any genre can be filling shelves here, in nearly perfect condition, and again, at half price. So a bestseller that lists at $29.95 and sells for $27.00 at a chain can usually be found here for $14.98.

They also have an excellent selection of rare and obscure books, with even a special Rare Book Room that closes early (at 6:20pm) every day. Since this store pays decent prices for used books, and the city is filled with so many avid readers who have limited shelf space in their homes, this store is a treasure trove of books like none other.

Readings and other events

Since this store is such a beloved part of the New York literary scene, it’s no surprise that it’s one of the more popular places for noted authors to do readings and other events in front of an enthusiastic crowd. The big chains also get the big mainstream authors, but anything approaching fringe or counterculture has at least as much chance of being at Strand.

Strand now sells their books online as well, and they offer very good prices on most things too. Check out the official Strand Books site for online purchases and information on upcoming in-store events.

The Central Park Kiosk is only open in good weather during the day from April through December and it’s located at 60th Street and 5th Avenue, directly across from the Pierre Hotel.