Statue of Liberty and how to see it for free 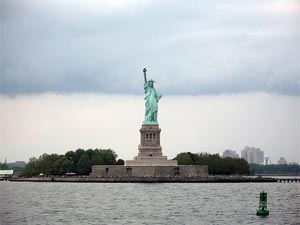 You can vaguely see the Statue of Liberty in the distance when you are standing in Battery Park, but that’s not good enough for most people, even on a really clear day. If you want to see the thing up close you have two main options, one of which is known to all locals but most tourists never hear about it.

Take the Staten Island Ferry from its terminal just east of the other ferries. It leaves every 15 to 30 minutes around the clock, and it’s absolutely free. This 5-mile journey takes 25 minutes in each direction, and goes right by the Statue of Liberty both ways, so you’ll have plenty of opportunities to ogle the thing and take lots of photos from various angles without spending one red cent.

When you get to Staten Island you can usually just stay on the ferry, even though the “official” rules say you have to get off and then get back on again. In the worst-case scenario you might have to wait in Staten Island for 15 to 30 minutes if you get unlucky arriving just when a big crowd is queued up to head back to Manhattan. The only time this would happen would be during the morning rush hours, so avoid that and you’ll be fine.

Why Option 2 is best for many people 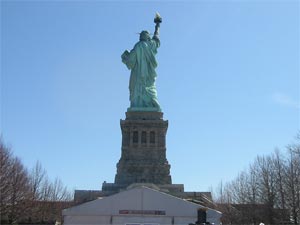 To be perfectly honest, many people find visiting Statue of Liberty Island to be boring, and for those people Ellis Island is even worse. Since 9/11 you can’t get up to the crown of the statue anyway, and you can only get into the base if you’ve made reservations at least a few days in advance. Admittedly the statue is surprisingly large and impressive when you are standing at the base of it, but once you are over that sensation you’ll be ready to leave.

Some people just skip Ellis Island, and you are under no obligation to check it out yourself, but if you choose to skip it then you are getting even less for your $12. The ferries all go to Ellis Island, by the way, so you can’t catch a direct ferry back to Battery Park.

Another hidden part of this equation that most people don’t consider until it’s too late is that the line to buy tickets for the ferry is usually very long, and once you have tickets you have to go through a confusing airport-style security set-up before you even get on the boat. From the time you get in line to buy tickets to the time you get back to Battery Park will usually be 3 to 5 hours, and that’s if you don’t spend too much time on either island.

The Staten Island Ferry, on the other hand, can usually be done in exactly an hour, and again, it’s totally free. There are plenty of places to sit down, and large open-air decks on each side for unobstructed photo opportunities. They even sell snacks and beer on the Staten Island Ferry, although don’t expect bargain prices or friendly service.

About the photos on this page

The photo on top is shrunken down to fit here, but it’s a full-size image of the Statue of Liberty that was taken from the Staten Island Ferry. Your own photo will be like that, except much bigger, and if you zoom in you can even get a nice frame-filling close-up from on the ferry. The second photo was taken from the entrance area to the base. You can also take good photos from in front of the statue, but your best shots will probably be from the boat as you are pulling up to the island for the first time anyway.

If you are hell bent on seeing the Statue of Liberty from the base of the thing, then at least make reservations so you can see the interior. You’ll be spending half a day on this excursion, but many people really do like their visit. If you kind of want to see the statue and take a few good photos of the thing, then the Staten Island Ferry is more than good enough. You also get to see more of New York Harbor, and you’ll be able to say you visited the usually-forgotten borough of Staten Island as well.