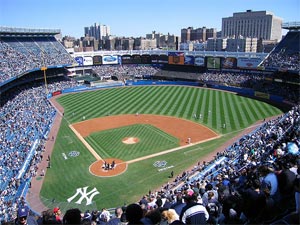 With at least two teams in each of the four major American sports (baseball, basketball, football, and hockey) there will always be a game or two going on in the New York City area. New York fans are notoriously confident and gregarious so seeing a home sporting event live can make for an unforgettable experience, and this is actually one of the few things that will make it necessary to leave Manhattan since only two of the teams play in the main visitor borough.

Prices for games for all these teams have been rising from expensive to ridiculous during the 00s. Particularly if the team is having a good season, games can sell out well in advance. Check for any game you are interested in attending on each team’s website, but even if they are sold out there will always be ways to get tickets.

Tickets for sold out games

If the game is still at least 4 or so hours away, you should check on Craigslist. This site is usually flooded with buyers and sellers, even up until an hour or two before the game itself. Needless to say, for popular games you’ll usually have to pay over face value, but for other games you can often get them for under face value. Craigslist has a good reputation for honest buyers and sellers, but with this kind of thing you can never be too careful. Meet someone in a public place and look carefully at the tickets before paying.

And there will ALWAYS be scalpers outside of every New York area game, but there will always be buyers as well. This is obvious, but prices and availability vary greatly depending on the game in question. This is basically an illegal practice, but it goes on discreetly in front of every game, although it may not be completely obvious at first. Again, check the tickets to make sure you aren’t being scammed. These scalpers like to protect their reputation so they are normally very honest, but if your English is poor you never know what someone might try.