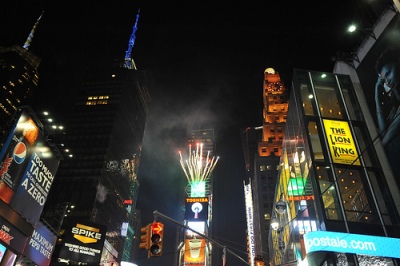 Ever since I’ve started to watch Sex and the City (the series) and later Gossip Girl (you can roll your eyes just about now), I’ve been dreaming about being in New York for the New Year’s Eve, sometime soon.

And apparently I’m not the only one totally in love with New York. The Big Apple ranks high in the list of New Year’s Eve destinations . The giant ball dropping over the historic Times Square is a sight to be seen at least once in a life time. The event is free to attend and each year, more than 1 million of people gather to see it live. Of course, millions more watch it on TV.

Since most of the people who travel to New York for New Year’s Eve have only thing in mind – see the celebrations in Times Square – it’s essential to know some travel tips for New Year’s Eve . First of all, make sure to start planning your vacation in advance. From mid-December to early-January the airfare and hotel rates tend to skyrocket in places such as New York…so the early bird definitely gets the worm (or should I say the lower rate?).

Flying the day before New Year’s Eve is definitely nightmare. So avoid December 30 at all costs. As for going back home, January 1 and 2 are the worst possible choices. If you are already in the USA and plan to travel to New York for New Year’s Eve, leave on December 29 and get back on January 3 (or whatever other lower cost option you might have).

Since we are still high from this year’s partying, here are some photos of New Year’s Eve celebrations ; they might give you some good ideas for next year!