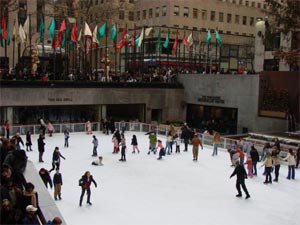 Rockefeller Center is one of New York City’s best-known landmarks, but it probably doesn’t deserve that status. It’s little more than a group of 19 office buildings set on 22 acres in the heart of Midtown Manhattan. Architecturally they are nothing special, but their overall prominence and key location have helped them gain status as a National Historical Landmark.

There are several interesting components to Rockefeller Center that make visiting the area worthwhile, and whether you intend to visit this collection of mostly-art deco buildings or not, chances are you’ll drift through the area a few times on your way from one place to another anyway.

A bit of history

Development began 1930 by John D. Rockefeller Jr., who originally intended to build an opera house on the site, but changed his mind after the stock market crash in 1929. The first 14 buildings were completed in 1939, just in time to house British Intelligence offices during World War II among the complex’s many residents. The list of companies and organizations that have been tenants is long, but today major entertainment companies are the most prominent occupants.

With its semi-famous address of 30 Rockefeller Plaza, or 30 Rock for short, the General Electric Building is the tallest in Rockefeller Center at 70 stories and 872-feet (266 m). The NBC television network is the most famous tenant, and they broadcast their news shows and the long-running Saturday Night Live sketch show from their 8th floor studios in the building. Studio tours are available to the public.

The famous restaurant/nightclub the Rainbow Room occupies the 65th story of the building. For the price of an expensive drink or menu item, you can visit the facility for great views of the Midtown area. Far better views are available in the recently-opened Top of the Rock Observation Deck on the roof of the building. It’s not cheap to get up there, but the views of the area are considered even more impressive than those from the Empire State Building by many who’ve done both.

Just in front of 30 Rock you’ll find a sunken square between the towers. From October through April each year the square is home to the famous ice skating rink that is open to the public. If you’ve seen it on TV or in films, be prepared because it’s smaller than you expect it to be. During the warm months the ice gives way to al fresco dining from a restaurant attached to the plaza.

Late each November the city’s official holiday tree is erected overlooking the skating rink, and the lighting of the tree in the days following Thanksgiving has become a major event. The tree stands until January 1st and crowds in the weeks leading up to Christmas itself are almost unmanageable.

The trend of glass-fronted studios was not lost on NBC, whose main broadcast facilities are in the General Electric Building. Each weekday morning the network beams its Today Show from a small studio overlooking the skating rink, just across from the GE Building. Crowds are often sizable, and especially during warm months the show often has musical guests who appear on a stage out front to even larger crowds.

The ground floor of many of the buildings is taken up by varied upscale shops. With a constant stream of tourists passing by there is no shortage of pricy gift shops, but also many designer clothes stores and bookstores are mixed in.