Reasons to go to New York this fall 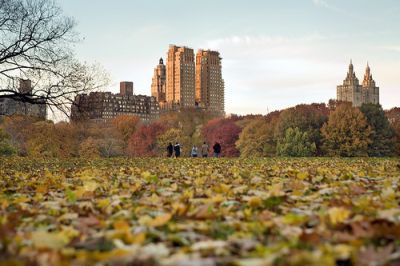 Fall is the perfect time to visit New York. With the summer heat and humidity finally subsiding, but the cold, wet weather yet to descend on the city, autumn is usually filled with sunny, crisp days and plenty of beautiful fall foliage. It’s also an ideal time to take in a baseball game at the new Yankee and Mets stadiums, or spend an afternoon lounging in Central Park, surrounded by fiery red, orange and yellow leaves.

If you are looking for a little inspiration to get you to commit to booking your flight to New York , you also should check out a guest post by a New York blogger that appeared in the Los Angeles Times called 6 Reasons to go to New York right now (reasons include cocktails now being served at the top of the rock and Open House NY October 10 and 11 in the city)

As it turns out, there is good news for those travelers who are itching for a little autumn trip to the the Big Apple. NYC & Company (the tourism office for the city) recently partnered with American Airlines to promote fall domestic flight deals through social media and online outreach.

The effort is part of the tourism agency’s aim to draw more leisure travelers to the city and promote New York as an affordable destination with some great values to be had. With tourism down just about everywhere, New York is fighting to gain back the five percent of travelers they’ve lost since last year.

Using social media, both American Airlines and NYC and Company are targeting travel blogs as well as promoting the deals on their Twitter and Facebook pages (follow @AAirwaves). The deal is targeting certain markets—specifically Dallas, Chicago, Los Angeles, San Francisco, Chicago and Miami.

Round-trip fares for Los Angeles or San Francisco start at $218; Dallas/Fort Worth starts at $198; Chicago, $168; and Miami, $138. The special fares are available only until midnight Aug. 21 for travel from Sept. 15 through Dec. 12, with some blackout dates. The lowest fares are for Tuesday, Wednesday and Saturday travel dates. Fares don’t include a federal excise tax of $3.60 per U.S. domestic flight segment; up to $18 per round trip in local airport charges, and a Sept. 11 security fee of $2.50 per flight.

According to the Los Angeles Times, hotel room rates in New York are still under $200/night, which means you will probably be able to afford getting a room in the city during your stay. In a place known for high-priced hotel rooms, however, iit can be a little tough to find a good, cheap hotel in New York.

Hotels in Manhattan tend to be more expensive, and while you can certainly save by looking for the latest deals and special or even bidding on a room on Priceline. However, if you are looking for the best way to save on your accommodations in New York, you are probably best off heading to one of the other boroughs and getting a hotel in Brooklyn or Queens.

In fact, Brooklyn is quickly becoming a new hot spot for many New York hotels. In a recent story on New York local news discusses how downtown Brooklyn is pouring the footing for a surge in new hotel construction. Despite the shaky economy, there are now six hotels in the immediate development pipeline that will be coming online between now and 20120. With an aggregate of 1,000 more hotel rooms available so close to Manhattan, meaning you may just see a drop in Brooklyn hotel prices in the near future.

>>Check out the Five Best Hotels for those not afraid to go to Brooklyn from our pals over at Hotel Chatter for ideas on where to stay on the other side of the bridge.

If you are looking for a little gambling interlude in your New York City Trip, then you may just be heading for the Vegas of the West: Atlantic City. Much like Vegas, the gambling center has been hurting badly during the recession, which has meant for some pretty steeply discounted rates at many cheap hotels in Atlantic City. Minimum bets at tables have also been lowered and many fo the big casino/hotels are offering free nights and cut-rate rooms.