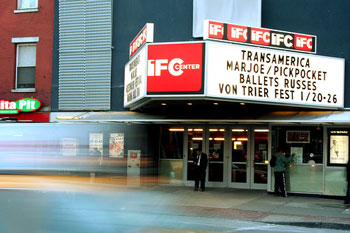 Going all the way to New York and spending time just watching a movie in a dark theater is something that most travelers would never consider doing. However, there are numerous reasons to reconsider kicking back with a bucket of popcorn in this fine city on a lazy evening and the main one is the access you have to movies that you really couldn’t just watch at home. Even with the amazing accessibility of the internet, we are still underexposed to arthouse and experimental films not made by Hollywood directors, and sometimes, these can be the best films out there.

In addition, there are a few movie houses in NYC that are worth going to simply for the experience given the unconventional venues. And, if the reasons above aren’t convincing enough, then you may just learn on your own that walking around the city all day may leave you craving at least one night out where you can just sit back, relax, and enjoy the show.

One of the more popular filmhouses, the Film Forum plays both contemporary and past independent and foreign films. It was started in 1970 by two film fanatics with “a $2000 investment, a tiny 16mm Bell & Howell projector and a rented loft space”, as stated on their website. They are the only independent nonprofit filmhouse in NYC and are therefore able to be far more experimental and riskier in their choice of films.

Some of the more recent flicks have included Wendy and Lucy, Werner Herzog masterpieces as well as some older Godard productions. You won’t find any contemporary Hollywood films on the screens here but you’re bound to discover something unusual, and most likely incredibly delightful. Prices are moderate and the venue, although small, is rather quaint and maintains just the right population in its crowd control.

Tickets may be purchased online up to seven days prior to screening (as many showings of rarer and more popular films sell out quick), or in person the day of the show, but not by phone.

The Angelika is a relatively large arthouse theater that has six separate branches all over the US with two in NYC. The bigger of the two venues, the Angelika Film Center, is located in Soho and was the first of the Angelika theaters to be established in 1989 and has more of a focus on independent and foreign films with recent showings of films such as The Savages, Paper Heart, and Indigenes.

The Angelika Film Center venue is most known for its café which serves food moviegoers aren’t always accustomed to and is a good place to linger while waiting for friends or just hanging out. The screening rooms themselves are underground but are pretty old and outdated so be prepared for a well-aged and well-stained seats and screens.

Also, be sure to be early because lines are a common occurrence here and shows often sell out, especially on opening nights and with the venue’s increasing popularity. Those things being said, the Angelika is a reliable theater with well-picked flicks so you most likely won’t be disappointed with the viewing.

A partner of the Angelika Theater listed above, the Village East Cinema is, true to name, located in the East Village. It is architecturally far more stunning than it’s sister theater and more nostalgic of older movie houses, as it’s framed in a Moorish-revival style with balconies and red-cushioned seating in its seven screening rooms.

They too screen better known independent films but they have also been known to show bigger name films such as Slumdog Millionaire and, unfortunately, G.I. JOE: The Rise of Cobra.

A member of the Landmark Family, an independent theater chain that prides itself on small arthouse venues all over the nation, the Sunshine Cinema is gaining the reputation of one of the hippest theaters in NYC. Located in an old vaudeville building formerly known as the Houston Hippodrome, the Sunshine Cinema has stadium seating and is quaint, nostalgic and all-in-all quite delightful.

It has five screening rooms and was recently renovated in the mid-90s. They serve delicious snacks and even have vegan options and attract a trendy urban crowd. As for the films, they screen both up and coming indie films, as well as old classics. Most of the names are super underground movies you’ve yet to hear of, but in time, you most likely will.

Some travelers love Times Square. Others despise it and avoid it at all costs. But it undeniably is a sight to be seen and the AMC movie theater located in its center is no exception. If you love the bright lights and colossal heights of 42nd avenue then you’ll love experiencing the 11 floors and 25 massive screening rooms at this venue. You won’t find any independent or foreign films here, only Blockbuster hits, but if you’re looking for a true NYC experience then the intensely bright and ostentatious AMC movie house is for you. They also have IMAX films at this venue for an additional $5.00 per ticket.

Although IMAX can be seen at the AMC Cinemas in Times Square, it is actually cheaper to go to the exclusively IMAX theatre at the American Museum of Natural History. Here you can see awesome nature films and feel like you are literally underwater, soaring through the air, in a beaver’s den, etc. etc. It’s all ridiculously awesome and you’ll be supporting the museum rather than the movie industry, which is pretty cool. The screens are 40 feet high and 60 feet wide with massive sound quality. It is definitely worth the price if you’ve yet to see an IMAX film and you’re sure to learn something educational as well.

This venue is by far the most unconventional and probably the most beautiful location to see a movie in NYC. It remains relatively unknown and therefore attracts a local and trendy crowd of film buffs and movie lovers. The films are literally projected on screens set up on sides of buildings, portable screens or just walls on the roofs of Brooklyn, Manhattan, the Bronx and wherever else the organization can rent out, including the roof of the Chelsea Art Museum.

The organization itself does much more than simply screen films but this is certainly one of the most accessible perks to those who simply want to enjoy a fine night out a warm summer evening. The films are only screened during the summer, from May-September, for weather purposes, but the organization works year round on workshops, equipment rentals and organizing their summer festival. Rather than trailers the films are usually preceded by a music performance at 8pm and begin screening at around 9pm.

The organization screens low-budget works by up and coming artists that are usually completely inaccessible because of the high cost of screenings. Thanks to Rooftop Films, if you’re ever in NYC over the summer months, you can have the opportunity to enjoy not only a one of a kind film but a one of a kind experience as well.

Pricing:
Varies by film, day and venue but usually about $9.00

*Actual screening location may vary. Call or check website for times and locations of films.

There are numerous summer outdoor screenings other than the Rooftop Film Festival, many of which take place in public parks, and the best part is, they’re all free! Even though the scheduled times of the films don’t start until sundown, many have music beforehand and the spots fill up very quickly so you’ll want to get there very early, even 3-4 hours for the more popular ones like Bryant and Central Park.

These films seem even more real as the soundtracks to them are performed live by various musical guests and they sometimes even invite the audience to sing along. There is a $3 suggested donation, which is highly recommended to keep the festival going and is very reasonable for a NYC show and a movie. Unfortunately these showings happen very sparingly, sometimes even only once per year so keep an ear and eye out for the special Music and Movie showing and check out the festival schedule for any other excellent acts you’d like to see.

The cult classic film, The Rocky Horror Picture Show gained notoriety and ultimate immortality when its devoted fans started having screenings where the audience members who by this point knew all the lines, dance moves and lyrics, began acting out the movie in front of the actual movie screens. Ever since, the Rocky Horror Picture Show film has been screened and performed again and again and has even earned its own consistent spot in NYC.

It’s true that NYC isn’t the only place in the world where you can witness and take part in a Rocky Horror Picture Show interactive performance, but you’re sure to have a ridiculous time if you do it here where it literally has its own hired cast in addition to the devoted viewers!

Attendees tend to dress up, usually in drag or skimpy attire. You can bring your own props or buy a prop kit at the door for $2.00, in addition to toilet paper for $1.00. Although it can seem somewhat intimidating, it’s really a lot of fun and you won’t be forced to do anything you’re too uncomfortable with. So let loose, dress up, dance, sing, laugh and you will have an absolutely incredible evening that you will never forget.

Screenings are every Friday and Saturday evening at midnight. Bring ID to prove you are 17+ as the film is rated R.

Pricing:
Adult: $9.00
ID is checked and viewers must be 17+ or accompanied by a parent or guardian.