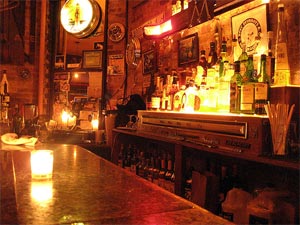 New York City is certainly one of the nightlife capitals of the world, and just as with most other attractions, the good stuff tends to be concentrated in the lower two-thirds of Manhattan. The better nightlife usually takes place in areas that don’t have a concentration of hotels and hostels, but taxis are plentiful and they can fly around town starting around 9 p.m., so staying in one area and partying in another usually doesn’t create a problem. The subways also run all night, and contrary to what some people expect, they tend to be jammed with people late at night, so the danger is minimal.

There are nightclubs in many different parts of town, but the main concentration of large clubs is in the western part of Chelsea on 27th Street and the blocks around it. The vast majority of places you’d consider to be nightclubs are downtown, mostly in and near Greenwich Village. There is a large concentration of bars that sometimes serve as small nightclubs in the East Village, and an increasing number of worthwhile places just across the river in Williamsburg, Brooklyn.

The above information is of little help because, just as in most other big cities, the nightclub scene changes almost on a daily basis in New York City. Places are hot one day and closed down two months later. Even some of the long-running stalwarts have been running into trouble lately, with periodic closings due to drug offenses and such. We’ll update this section frequently with new information, but the best advice will continue to be…

Where to find nightlife listings

There are a couple of websites that do an okay job of keeping track of what’s going on on a given night, but by far the best thing to do is get Time Out New York when you arrive in town. It comes out every Wednesday and covers listings from Thursday through the following Wednesday. They do an awesome job of listing everything even remotely worthwhile, and this includes extensive listings for museums, galleries, movies, and special events as well. It’s worth ten times the $2.99 cover price, and is available pretty much everywhere.

A newer entry for nightlife listings is L Magazine, which is free, and also comes out on Wednesdays. It’s smartly written and sometimes includes listings that Time Out New York misses, but it only concentrates on nightlife and a few other related topics. It’s most commonly found in Greenwich Village and in Williamsburg in newsboxes emblazoned with their L logo, but lately it’s been popping up elsewhere as well.

Needless to say, there are always dozens of things going on every night, including Mondays and Tuesdays. The live music venues tend to be concentrated in and around Greenwich Village, but there are many notable exceptions. If you want to just sample some random rock bands you can go down to Bleeker Street in the Village, but don’t expect to see anybody you’ll ever hear on the radio in the future. The places there tend to specialize in tribute bands and other cheesy things, but of course that can be fun sometimes too.

Check out Time Out New York for weekly listings, or if you are interested in perhaps seeing a big name band that might tour through the city and sell out quickly, you should check Pollstar.com for the time you’ll be in town. They have all the major concert listings, as well as links to where tickets can be purchased online.

The bars in New York City can stay open until 4 a.m. every morning, but most close between 1 and 2 a.m., at least on weeknights. One of the things that makes nightlife in New York City so magical is that there are small bars spread out through the city. This makes it easy to check one place out and if it’s too crowded, too empty, or playing music you dislike, you can just walk right back out and be in the next place only a minute or two later.

Your quick guide to drinking neighborhoods

Upper West Side – This area specializes mostly in frat-boy-style bars, but there are definitely some other places mixed in. It’s not a great nightlife area, but if you are staying in this neighborhood there are plenty of opportunities within a close walk.

Upper East Side – There are a few interesting places mixed in, but for the most part this area is a dead zone. It can be interesting to hang out in places inhabited completely by locals who are completely un-self-conscious of being hip or trendy.

Midtown – This huge area is mostly terrible at night. You’ll find loads of cookie-cutter “Irish pubs” around here, jammed to the gills with tourists and businessmen. These can be fun once in a while, but be sure not to get stuck here. Most of this area is completely a ghost town late in the evening, except for a couple of notable districts just below.

Hell’s Kitchen – This scarily-named neighborhood just west of Times Square has become quite nice in the last decade or two, and 9th and 10th Avenues are loaded with interesting restaurants and quite a few bars. You could do a lot worse than this area if you are staying in Times Square and you want to be close.

Times Square – This area is truly a nightlife nightmare. Aside from a few Irish Pubs, you’ll find some faux trendy nightclubs and bizarre chain restaurants. You’ve also got plenty of outrageously priced hotel bars, but the best advice is to head south from here, or at the very least, walk a few blocks west to Hell’s Kitchen.

Chelsea – As mentioned above, this area is home to most of the city’s “mega-clubs” although the lineup changes every week or so. Check Time Out New York for current listings of DJs and themes. The rest of the area has many good and interesting bars – some new, and some well over a century old. There are some gay bars in this area as well.

West Village – This is an excellent area for restaurants, but is kind of weak on bars. There are some decent places spread throughout this large area – including the famous and recommended Chumley’s Bar at 86 Bedford Street – but things around here tend to stay fairly calm and dignified. The area on and around Christopher Street has a few gay bars.

Greenwich Village – The middle part of this huge “village” area is dominated by New York University, which means there are quite a few bars normally filled with people just on either side of the legal drinking age (21 years old). Bleeker Street is home to a famous strip of bars – several with live music or comedy – but these tend to be jammed with tourists and bridge & tunnel types. Generally speaking the further east you go the more interesting this area becomes.

East Village – Jackpot! This is easily the best drinking neighborhood in the city, especially if you include its eastern section, also known as Alphabet City. There are bars on nearly every corner once you get east of 2nd Avenue. The subway isn’t the most convenient way to get to this area, but it’s well worth walking a few extra blocks, even late at night. Avenue A and Avenue B have several places on each block, so you could do a long pub crawl through this neighborhood only going a hundred yards or so.

Lower East Side – This small neighborhood just south of Houston and East of 1st Avenue is like a new mini-East Village. It has the same somewhat wild vibe, but it’s a bit trendier and more hipster oriented. There are a couple of live music bars mixed in, and crowds can get crazy on weekends.

SoHo – Starting in SoHo and going south Manhattan is dead at nights and on weekends. There are a few fun bars mixed in, but this is not really a good drinking neighborhood in general.

Williamsburg, Brooklyn – If you are taking the subway from Times Square you can be in Williamsburg in 15 to 20 minutes. It’s basically like the eastern annex of the East Village, and new places are opening all the time. Take the L subway line to Bedford (which is the first stop across the river) and you’ll exit at Bedford and 7th Street. There are loads of interesting places within a few blocks in each direction of that corner, and this neighborhood has become a legit destination in the last decade. Many people from Manhattan actually come to Williamsburg to party instead of the other way around.