The 4 Seasons of New York Weather 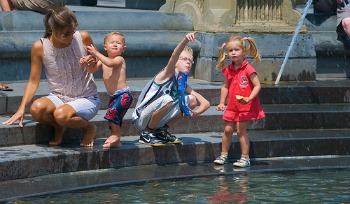 When you’re planning out a time to go on vacation you don’t only need to consider where to go, but also when to go. You’ll want to go on your trip during a time when the weather is suitable for your desired activities. If you, like many others, decide to go on a trip to New York, consider the climate for each season before selecting dates.

New York experiences all four seasons, which is one of its many benefits. The coldest season of the year is winter. New York experiences winter technically from the end of December until the end of March, but it’s possible that you’ll see snow anywhere from October to May. Winter weather is very unexpected in New York and ranges from basic snow flurries to lake-effect snow blizzards that drop more than a foot of snow in a single night. The average winter temperature in New York state ranges from 26 to 40 degrees Fahrenheit during the winter. You won’t see much rain but you will see plenty of snow. During an average winter, New Yorkers expect anywhere from 30 to 50 inches of snow.

Spring follows winter and is typically hit-or-miss when it comes to temperature and weather conditions. A typical spring day ranges in temperature from 45 to 68 degrees Fahrenheit. It’s not uncommon to go from below freezing temperatures one day to sweatshirt weather the next day. The evenings are typically cool, and you should expect plenty of rain because the phrase “April showers brings May flowers” extends beyond just rain in April. The average monthly rainfall from March to May is 3.4 inches.

Summer is the exact opposite of winter in New York state. It’s warm and humid due to its close proximity to bodies of water. In New York City, the Atlantic Ocean greatly impacts the weather and summer days can be hot and sticky. When going upstate, the Great Lakes contribute to humid conditions. The average daily temperatures from June through August range from the lows of 64 to average highs of up to 85 degrees Fahrenheit. Summers are not completely dry though, and thunderstorms should be expected on occasion as the average monthly rainfall is at 4 inches.

The climate cycle completes with fall. Autumn is when temperatures begin to drop and the leaves fall from the trees as they prepare for winter. It’s still relatively warm, so don’t pull out all your winter gear just yet because average temperatures range from 40 to 54 degrees. It’s also wet during autumn, with average monthly rainfall totals at 3.7 inches a month.

If you’re set on New York as your destination you should ideally choose to go in either winter or summer, depending on the activities you want to carry out. If you want to go for a swim, camp or enjoy nature, stick with July or August. If you want to see plenty of white snow and don’t mind a cold day, January and February are prime vacation months.