New York to Washington D.C. for $1 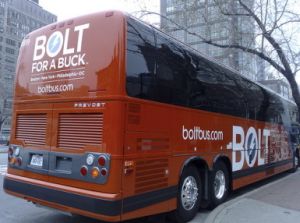 New York to D.C. for only $1? That’s right, there is now a way of getting between the Big Apple and our nation’s capital for as little as $1. The Bolt Bus, which is the new budget subdivision of Greyhound, services the 230-mile route between New York and Washington DC and offers some tickets for as little as 100 little pennies. Budget travelers won’t find a cheaper way to get between New York City and Washington, D.C., and with free wi-fi, the four hour trip can be put to good use by those who are blogging on the road or just want to check their emails. The service has also become so popular since it started in March that Boltbus will soon be offering the same service between New York and Boston.

How do they do it?

The Bolt Bus pricing system works on supply and demand. As soon as a day’s routes go on sale, at least one seat will be offered at $1, with other seats offered at different price levels. The more in demand a seat on the bus, the more the seat will go up in price until the whole bus is full. That means when a bus is starting to sell out, prices continue to rise until all the seats are gone.

To get one of the coveted $1 sets, you’ll need to book your ticket as early as possible. It is also helpful to pick a route that isn’t crowded with the usual commuters (like a mid-morning route). Because the Bolt Bus just started running in March, 2008, however, it is still fairly easy to nab one of the $1 seats even during busy times. Just plan ahead and book early for your best shot.

Despite the cheap ticket price, the Bolt Bus is not what you may imagine when you think of budget bus travel. In fact, this bus is even nicer than usual Greyhound buses. Several rows were removed, which gives travelers many inches of additional leg room. The buses are also equipped with power outlets so you can plug in your ipod, laptop, cell phone, whatever. The bus also has free wi-fi, which is more than worth the $1 fare in itself. You can check emails or watch youtube as you make the 4 hour or so journey. Pretty sweet deal.

While not something your casual traveler can take advantage of, Bolt Bus does offer frequent traveler rewards. If you are a frequent business or leisure traveler you get a free trip with every 8 trips paid for.

Tickets are available for on-line purchase on the bus line’s website at Boltbus up to two hours before departure time. There is a 50 cent service fee attached to online bookings, which while 50% of that $1 ticket is still not a big deal. You can also purchase tickets by walking up to the actual bus stop, but expect to pay a higher price if there are any seats available at all.

Tickets are non-refundable and non-exchangeable, so if your plans change you’re going to have to swallow the fare. The exception to this rule is if there are mechanical problems or bad weather, in which case you can request a refund or reschedule your trip.

When you purchase your ticket online, you will receive a confirmation email. Make sure you PRINT this confirmation. It serves as your ticket and you can’t get on the bus without it.

It is recommended you show up at least 15 minutes before departure time to allow for boarding etc.

For each ticket sold, you are entitled to bring one bag to check underneath the bus, and two carry on bags (such as a purse or small backpack) that must be small enough to be able to be stowed in the overhead bin. Oversized items such as a bicycle or golf bag are allowed, but count as your one checked bag.

Where to catch it

In Washington, D.C., there is only one stop, at 11th and G St. NW. All of these stops are adjacent to Metro centers, making it easy to get around once you get to your final destination.

Remember that these are all street-side pick-ups and drop-offs, meaning you are subject to the outdoor elements while you wait.