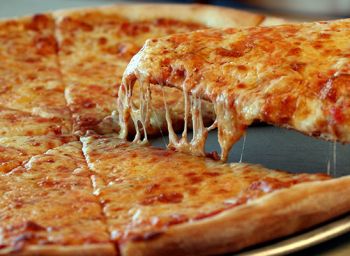 Pizza as we know it today began in Naples, where it was first sold by street peddlers in the early 18th century and was known for many years as a food for the poor. Since the late 19th century, pizza has spread throughout the world, altering its shape, changing crust style and adding and gaining toppings from region to region. When pizza came to New York with the hoards of Italian immigrants in the 19th century, it morphed again (and some will say was perfected)–getting bigger, crispier and cheesier in its journey across the Atlantic. This transformation gave birth to the New York-style pizza, which is identified by its wide, thin, foldable slices. It traditionally has a hand tossed crust, is light on the sauce and is topped with lots of mozzarella cheese. The monstrous size of these slices can often be difficult logistically, making the traditional way of eating pizza in New York folding the slice in half before jamming it into your mouth.

While some will argue that there is no pizza quite like New York pizza (some out of town pizzerias will even have New York’s hard, mineral rich water transported in to make an authentic, crispy crust), others will tell you what makes New York slices so special is not so much the way they taste, but rather the tradition behind eating them. With pizzerias all over the city offering up almost identical tasting slices, it’s not so much about where you buy your slice, but how and with whom you eat it.

There is just something so New York about stumbling out of the bar at 4 am and stopping to get a fresh, hot slice on your way home—eating it standing up, folded in half, grease dripping down your chin, still happily buzzed while laughing with your friends. Plus, where else can you find pizza joints selling hot, fresh slices at all hours of the night?

My current editor and former New York resident Roger pointed out another very interesting New York Pizza phenomenon. For years, the price of a slice has mirrored the price of a subway ticket. Odd as it may seem, this very New York market interplay was first pointed out in 1985 by a banker named George Fasel and has seemingly stayed true since then. In fact, the so-called “Pizza Connection” has even been explored by the New York Times. (Read the full story “NYC; Beware The Price of a Slice“).

>>If you are interested in where to find a great slice, or want suggestions on other great, cheap places to eat, check out my post “Great, cheap New York restaurants: An intern’s budget picks for delicious eateries that won’t break the bank”