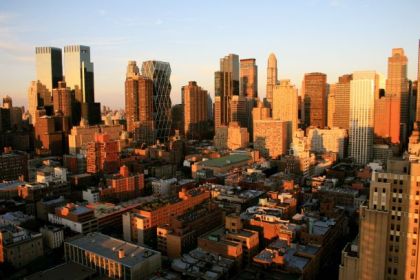 With the oppressive humidity and heat of summer in New York subsiding by September, this autumn month can actually be an ideal time to head to the Big Apple. The summer tourist crowds also start to dissipate and with kids back in school, you’ll find New York mostly reclaimed by local residents. The weather is still warm and pleasant without making you immediately melt when you step outside of anyplace that’s not air conditioned.

What to do in New York in September

Go to a Baseball Game 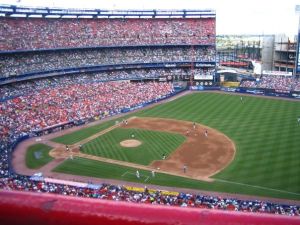 Baseball season is still in full swing in September and this is a great time to soak up a little local New York flavor. What could be better than eating hot dogs, drinking overpriced beer and listening to crusty New Yorker baseball fans cussing at the other team?

While New York is considered to be the fashion capital of the United States year-round, this becomes especially true during a few weeks of the year when fashion week comes to the city. Even if you aren’t lucky enough to score tickets to one of the shows under the tent at Bryant Park, it is certainly a spectacle worth checking out and an opportunity to scope out celebrities.

Arthur Avenue in the Bronx has been dubbed New York’s “real” Little Italy. A street lined with delis, Italian grocers, bakeries and cheese shops with piles of Calabrese cheese, Arthur Avenue has long been the historical and commercial center for Little Italy in New York. Here you will find fantastic markets, great pizza and more.

This is definitely an activity that should be enjoyed during all times of the year, but any visitor to New York in September should certainly not miss eating a big slice of New York Pizza. Not only is this cheap way to get a meal in the city, but many will argue you’ll find the best pizza out of Italy in New York.

Hang out in Central Park 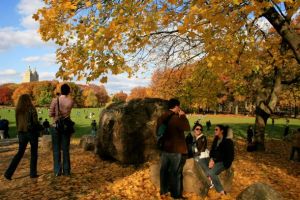 The weather in September in New York is often still be blissfully warm and summer like without being oppressively hot and humid. This means that is it probably an ideal time to enjoy being outside and hang out in the park. Plus, with the park taking up so much of Manhattan it’ll be pretty hard to avoid at least stumbling into the park at some point.

Holidays Festivals and Events in New York in September

Remembering September 11—Of course September 11 marks an important and tragic anniversary to New Yorkers and every year there are memorial concerts and events around Manhattan honoring those who were lost in the attacks on the World Trade Center in 2001. There is World Trade Center Site Memorial Ceremony and Remembrance, which takes place at the World Trade Center site on the morning of September 11th. The names of all 2,751 victims are read aloud and four moments of silence are observed to commemorate the times when each plane hit and each tower fell. At sunset, the famous “Tribute in Light” lights up the skies above New York City for the night.

New York Fashion Week—New York is a playground of models, high fashion and superbly dressed men and women year-round, but for a week in September (and then again in February) the fashion world descends on New York City for the many shows at Bryant Park. Whether you are able to somehow worm your way into one of these events (my friend and I were once given tickets by a guy at a bar who wasn’t going to use them) or not, there are also a host of great parties and fashion related events all over the city you can take advantage of.

New York Authentic Mexican Restaurant Week—Does this event need anymore explaining? If you are a lover of the tasty cuisine from our neighbors to the south, then this is the vent for you. Mexican restaurants around town offer three course prix fixe menus allowing food lovers to experience the flavors, aromas and textures of the best authentic Mexican food in town.

San Gennaro Festival—If you love Italian food (and let’s be honest here, who doesn’t) then September is a great time to be in New York. Little Italy’s Feast of San Gennaro runs from September 11-21, 2008. This outdoor festival is one of New York’s oldest and most popular. Brave the crowds for live entertainment and lots of great food.

Classical Music in Bryant Park—After the tents are taken down and Bryant Park is reclaimed by those other than the fashion elite, there are a great series of classical music concerts which take place here through the end of September. For a few hours during after-work hours, musicians from the New York Philharmonic, The Metropolitan Opera, Orchestra of St. Luke’s, New York City Opera and The New York Pops perform free concerts in this midtown park.

Weather in New York in September

September is probably one of the best months weather-wise in New York. While the summer months tend to be suffocating hot and humid, September often brings welcomed lower temperatures and fall breezes. The average high is usually around 76 degrees F and the low is around 60 F. Be prepared for cooler temperatures, but in general you will find plenty of warm weather and sunshine in New York in September. Make sure you do bring layers, however, as it can be chilly in the evenings and the subway can still be stifling hot during the day.

Getting to New York in September

Since September marks the end of the high summer tourist season, it should be easier to get affordable airfare to New York in September. While flights in September will probably cost more than in February, it is actually an ideal time to get both a great price on flights to New York and still be able to enjoy pleasant weather in the city.

Where to Stay in New York in the September

Again, September marks the end of the high tourist season, which means that you will likely have an easier time getting a good price on the hotels in New York. While hotels in Manhattan tend to be expensive year round, you will have more luck getting a good price on a place to stay in September than in July or August. If you are looking to stay in the heart of Manhattan and are on a tight budget, you may want to look into one of the many hostels in New York (check out the Best party Hostels in New York and Hostels near Times Square).