New York in February–Worth the cold

The February wind blows cold in New York City, but that doesn’t mean that it’s a bad time to visit. With a few minor considerations for the weather, even the most inhospitable ferry ride to Ellis Island or New Jersey becomes an enjoyable and classic New York experience to remember. Other benefits of visiting New York in February include the fact that you’ll have the chance to celebrate Valentine’s Day at a world class restaurant or romantic bar and then cap off the evening with another of our romantic ideas for New York. 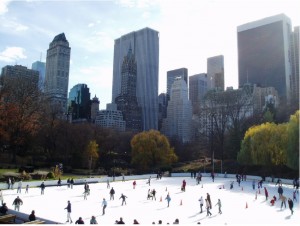 February also brings the Presidents day holiday, which is a recognition of George Washington’s and Abraham Lincolns birthdays (both in February) as well as a reminder of the service of other statesmen of the revolution. Best of all, it’s a three day weekend so you can take a page out of our playbook and enjoy one of our three day itineraries or pick and choose from the hundreds of attractions and things to see that New York offers.

Traveling to New York in February also opens the door to a number of traditions that are only available in the winter, such as ice skating in Central Park or Rockefeller Center, and you stand a good chance of getting to go cross country skiing in Central Park.

Both the NHL and the NBA are in-season in February, so it’s possible to see either the Knicks or the New York Rangers play depending on their schedules when you’re in town. There are also many concerts in New York in February as well as live theater and big name bands coming through Madison Square Garden.

Urban environments make the wind feel colder and shields you from direct sunlight, so bring your most stylish overcoat, February is not a wet month in New York, but, depending on where you’re coming from, it can seem a bit cold. Highs during the day hover right around freezing, but the lows are only a few degrees colder and precipitation is light, with only a few days of rain totaling about three inches for the month.

Find a Forecast for New York

Getting there in February

Airfare to and from New York drops considerably during February and March, so this is a great time to go. New York is an expensive city, no way around that, but airfare is a great place to save and free up some spare change for a carriage ride or Broadway show. 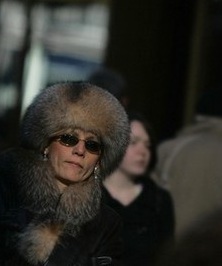 Unlike most travel advice that tells you to dress in layers to adapt to any weather, the best way to dress for New York in February is to dress in your normal clothes, then add a heavy wool overcoat or down jacket on top. You’re going to be going in and out of doors all day when you’re visiting New York, and most places like the Metroplitan Museum of Art and restaurants provide a place for you to check your coat, but not three coats and a sweatshirt. So dress like you would if you were visiting New York in April, then add a hat, gloves, scarf and one layer so warm you’d take it to Alaska.

February is a great time to upgrade from that budget hostel to a slightly nicer NYC hotel since the rates are going to be cheaper in February and the hotels less crowded in February. If you’re used to staying in a room with bunks, maybe consider upgrading to a private room. Also, consider location, as any one who has visited New York knows, you end up walking a fair amount, so splurging on accommodations near attractions you want to see and areas you want to visit is never a bad idea in the winter months.

Just because you’re visiting New York in February doesn’t mean you should expect any less from your trip. Depending on what you want to do you can find everything from cheap bars and clubs for dancing to great restaurants to indulge your inner gourmet to cheap eats where you can fuel up for another trip to the Guggenheim Museum. It all depends on your ideal itinerary and how you want to remember New York.

There are some great hotels in New York with deals on rooms if you are booking early enough to ask. Also, look into airfare and lodging combinations. You’ll save big booking a flight and a room together and if you’re feeling especially lucky, there are flight, hotel and entertainment packages that will get you backstage at a show or front row at the opera without adding a cent to the ticket price.