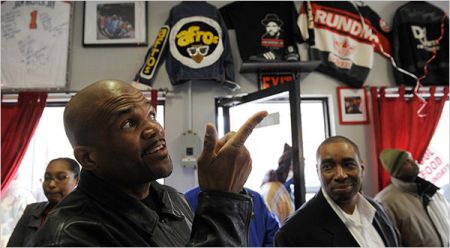 We all know that New York City is home to about a gazillion different attractions. Whether you are checking out the MET, taking a ferry out to the statue of liberty, strolling past Radio City Music Hall or just taking it all in at Times Square, it is sure that no traveler will ever be bored in the Big Apple. With plenty to do and see, in fact, the only thing you’ll have to worry about on your trip to New York is which attractions to leave OFF your list.

That being said, if you aren’t much of one to enjoy traditional art museums or waiting in long lines with packs of fanny packed tourists armed with cameras and want to explore a different and very real side of New York, there is a new museum in town that may just suit you.

Just a few weeks ago, a new Hip-Hop Museum opened in the small town of Hollis in Queens. The museum/burger joint (which sells $1 burgers), is located in the twon that was once the home of many now successful hip-hop artists such as Run-DMC, Ja Rule, LL Cool J, Irv Gotti and more.

Orville Hall is the owner of the restaurant and childhood friend of the members of Run-DMC (who happen to be the best represented rap group in the burger joint/museum). In a recent New York Time article about his Hollis’ Famous Burgers joint, Hall said, “Hollis is our Motown, our Nashville, our Beale Street,” in reference to the working-class black neighborhood being a breeding ground for successful rap artists.

While calling this burger joint a museum might be a bit of a stretch, the restaurant boasts more than 100 items of the walls, including a gold and a platinum Run-DMC albums and other memorabilia.

Now those interested in checking out the hometown of some of raps early legends can get a first-hand look at the memorabilia all while sipping a cup of “Hollis Famous” lemonade and downing $1 min-burgers.

According to the New York Times, the location of the new restaurant/museum at Hollis Ave. and 203rd in Queens is not a glamorous one and “Neighboring storefronts are shuttered with metal roll-down barricades tagged with graffiti and across the street, the windows of a building are boarded up.” However, for hip-hop fans and those looking to get way off the beaten path, visiting the Hollis Hip-Hop Museum and burger joint could be well worth the trip to Queens.

Personally, this place had be at $1 burgers.

Photo from New York Times article “Putting Together a Hamburger,a Neighborhood and Hip-Hop”