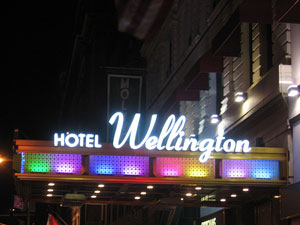 Everyone is tired of hearing about the weak economy, and so am I, but it’s actually creating some opportunities that are astounding for those who aren’t yet broke. You certainly know that hotels in this city are notoriously expensive, and this is especially true during the peak summer travel season. But this summer there has been such a lack of demand that places are honestly charging about half of what they would last year.

Suddenly it’s a buyer’s market for the first time in decades, and great hotels are having to compete to even keep their doors open, much less make a big profit. Normally when you look for cheap hotels in New York City you’d discover that weirdly small rooms in 1-star hotels near Times Square would start around $150 per night, but this summer you can get excellent places for that same price, or even lower.

You have probably already heard that cheap flights to New York City are easy to find this year too, so just put in your dates and you’ll be pleasantly surprised by the results. Well, I’ve just read about a brand new boutique hotel that opens its doors on July 2, and they have rooms starting at $149 per night, or slightly more for an upgraded room with the third night free if you pay for two nights! It’s called the MAve Hotel (short for Madison Avenue) and it’s in the Flatiron District, which is just south of Times Square and actually much nicer than Times Square for most people.

Hostels continue to be cheap

This city actually has a large and growing number of hostels, which have been popular with European travelers for years, and now Americans are getting into the act. There are New York hostels all over Manhattan, though most of them are, unfortunately, in or near Times Square. For a price starting around $30 per night you can book a bed in a dorm room and usually even have access to Wi-Fi and a community kitchen too, so it can be a very cheap way to go.

Bargains for locals as well

This site has many readers who actually live in the NYC area, and not surprisingly getting out of town is much cheaper this summer than normal. There are bargains to be had out of JFK and LaGuardia, but I’ve noticed that flights from EWR (Newark Airport) show some amazing deals. Fly down to Miami for next to nothing for 3 days and live the good life at one of the nearly-empty hotels. There’s plenty of cheap parking at Newark so you don’t even need to bother with taking the train or one of those airport shuttles.

Summer 2009 is definitely depressing for some people, but if you have a bit of time and money, then the world is your oyster.