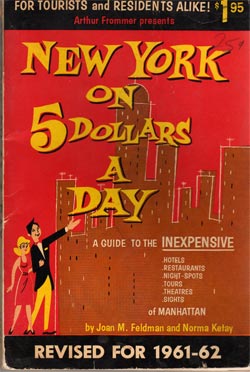 BootsnAll.com, which is the main site on the travel network that brings you Newyorklogue, has just published an interesting article called New York on $5 a Day – Then and now. If you are a fan of NYC already or planning your first trip here you might find it interesting to see what has changed in the last 47 years. Most of the businesses described in the article are no longer operating under the same name, but a few of them are and it’s interesting to see what has changed.

In a way, the most shocking aspect of the story is how much prices have changed. According to official government statistics, inflation has risen about 700% since 1961, meaning that $5 is 1961 is like $35 today. But in New York City the inflation rate, at least for budget travel, seems to be more like triple that amount at least. Museums that cost $1 back then now charge $20, and in some cases the differences are even more dramatic.

It’s weird to think that you used to be able to get a hotel room for one person for around $3 per night. Even if the bathroom was down the hall, that same room now starts around $90 per night, and many would feel lucky to get it. Check out the article for all the grisly details and some interesting surprises.