New York Beaches–Sandy and fun in the summer sun

New York beaches may not have spawned their own subculture like the beaches of California or Hawaii, but there are some great spots to be found near the city for getting sandy and catching a tan with the Atlantic at your feet, as well as a surprisingly thriving nude beach scene. 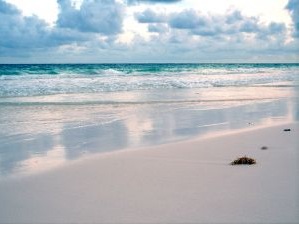 Although many of the sandy sections of the coast have turned into cotton candy carnivals more famous for their hot dog eating contests than surfing and volleyball, locals with beach bags in tow grab sandy patches all over the coast, from the Jersey Shore to Coney Island and Queens.

The Ramones paid tribute to Rock-Rock-Rockaway beach in song, thousands more pay tribute every year by going there and enjoying the sun and sand in person, lounging around on one of the few beaches in the New York area that is neither crowded, expensive or exclusive.

If you don’t have a house in the Hamptons and you don’t want to spend your day strolling the boardwalk, Rockaway Beach is a good option. There are surfable waves in the water, handball courts aplenty and enough space for a family to relax and enjoy the sun.

Get there: Take the A train to Broad Channel and transfer to the S train to Rockaway Park-Beach/116th St. 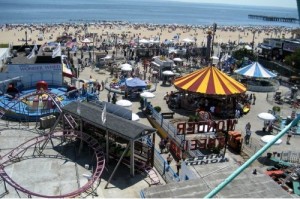 Originally a beacon of American hope and prosperity, Coney Island’s main attraction is the amusement park and rickety roller coaster—the Cyclone—at Astroland. Don’t let the run-down rides fool you though, Coney Island was such a symbol back in the day that it has cemented itself a place in history and still competes for tourist attention even though the water and sand are fourth or fifth down the list of reasons to go.

Coney Island now pulls in people with a cluttered menu of events and activities throughout the summer, www.coneyisland.com contains a complete list and for more info call 718-946-1350.

Get there from Manhattan: D, Q, N or F train to Stillwall Ave/Coney Island Terminal

Long ago, Long Beach was a stretch of sand where you were equally likely to have a celebrity sighting as a sunburn at the end of the day. Developed as a “Riviera of the East,” the Long Beach boardwalk was built specially by a herd of elephants and the surrounding architecture was designed to be reflective of the Mediterranean style.

Now, the beach is a favorite for it’s easy accessibility from the city and the roller blade and bike path that run along the water.

Get there: From Penn Station, take the LIRR to Long Beach

One of New York’s most “beachy” beaches, Jones is where you go if you want to build a sand castle, check out the beach volleyball players or toss a beach ball around. Jones is also the place to go if you want to catch some live music; it’s famous for the concert series that takes place each summer.

Other attractions include an Olympic size pool and miles of bike paths along with tennis, golf, basketball, softball and picnic tables. Despite the attractions, it can get a little crowded and it’s not as easy to get to as some of the other beaches on this list.

Get there: From Penn Station, take the LIRR to Freeport, then get on the Jones Beach shuttle bus

If speed chess and vodka are up your alley, then Brighton Beach is for you. The signs are in cyrillic here and the kids and cuisine are both Slavic. There are other beaches within areas dominated by one culture, but none so public, pristine and eclectic as Brighton.

Brighton is considered the alternative to Coney Island and, although Coney Island is a walk through the past, Brighton actually hearkens back to an even older world, and that’s probably the reason that Brighton now goes by the moniker “Little Odessa” after a city in Ukraine.

Get there: Take the B or Q train to Brighton Beach

If you want umbrellas and long walks on the beach, best to head to the Garden State and spread out on their 127 miles of coastline. There you will find surfing, spas, and sunshine bringing in more tourists than any other aspect of the state.

I’m not sure if visitors to Atlantic City or the anglers that come to fish count as beachgoers, but it wouldn’t surprise me. If you’re from Philadelphia or New York and you’re looking for a beach to spend a week at with your family, New Jersey is the best option.

Beaches in the Hamptons

New York’s wealthiest folks take their vacations in the Hamptons, a beach-filled section of Long Island filled with big houses, private beaches and even more and even bigger houses.

The two marquee spots, Cooper’s Beach and Main Beach are ranked in the top few beaches in the US every year and are technically open to the public, although getting there can be a challenge: both beaches require special parking permits and if you’re going to stay close enough to walk to the beach, you can probably afford to buy your own beach.