Montauk Monster – Should we feel scared or hoaxed? 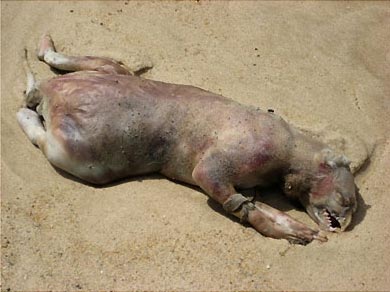 No one likes a good monster sighting like NewYorklogue, so it was impossible to resist passing this one along. The fine folks at Gawker.com, who never shy away from sensational stories, have posted a photo recently of what they are calling the Montauk Monster. The story goes that several witnesses saw this beast after it had washed up on the beach in Montauk, which is at the far tip of Long Island, in late July, 2008.

Some speculation is that it’s part of a viral marketing campaign (you won’t fool us into participating if that’s the case!) and other sources reckon it’s a raccoon that had its fur and face rotted off after spending more time in the ocean than it probably would have preferred. At first glance the theory that it may be a turtle without its shell seemed sort of plausible, but closer inspection at the paws reveal that it’s either a hoax or possibly that battered and bald raccoon. And there’s really no telling where this photo was taken, although supposed “witnesses” have said it’s “real”.