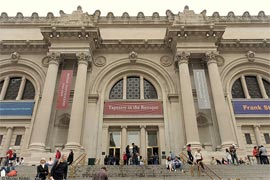 One of the world’s great museums, the Met, as it’s usually called by locals, is definitely worth a visit for nearly every visitor to New York City that doesn’t hate the whole idea of art museums. There are over 2 million works in the permanent collection, and always a few temporary displays going on at any given time as well.

The focus here is on visual art, mostly in the form of paintings, but included in the collection you’ll find works from nearly every segment known to the Western world. You’ll find plenty of masterpieces from European greats, and also pieces from Egypt and other older civilizations, modern and classic works from North America, and items from every other region on earth that has produced notable art. Things are conveniently divided into different areas throughout the Met, so it’s easy to split your group up and have everyone see what they are most interested in.

This is one of those museums, like the British Museum in London and the Louvre in Paris, that is just too big to have any hope of seeing all the displays in one visit. You are best off choosing just a few areas to view in depth, and then perhaps take a quick walk through some other areas to see if anything catches your eye. Even people who aren’t big museum fans will appreciate the size and scope of the building and the collection here. There are also displays of musical instruments, armor, and other non-art items that will appeal to some people who don’t get a thrill from paintings.

Finding out about the temporary exhibits 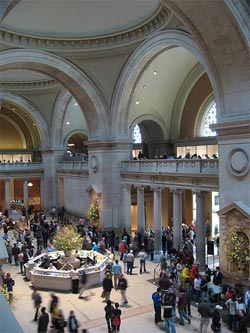 At any given time there are at least a few different special exhibits going on at the Met. Even if you aren’t terribly interested in the main collection, you should take a peek at what the specials are when you visit. They tend to have at least one display that deals with pop culture or something else considered fun, and they also have more highbrow programs as well. You can see what’s currently on at the Specials page on the official website. You can also get an up-to-date list in Time Out New York magazine once you arrive.

The Metropolitan Museum of Art is one of many in NYC that charges a “suggested donation” rather than a fixed fee. Here are their “suggestions”:

Those suggestions are just guidelines. It’s true that most people pay exactly what they suggest, but you can literally offer them a penny and you’ll be handed a ticket by an employee who’ll have a hard time disguising their contempt for you at that moment. But rather than mocking them with a penny, you should feel free to pay what you feel you’ll get out of it.

We’ve been there a few times paying full price, and we’ve been there other times for just a quick 45-minute walk-through on a busy day with a newcomer in tow. On those short visits we’ve paid $5 and not been hassled at all. If you are loaded and you plan on staying for 3 hours or more, pay full price. But if you are on a tight budget and/or you don’t plan on spending long inside, you can proudly pay $2 or $5 or $10 if you prefer. Quite a few locals go often and literally pay $1 each time, so don’t worry about looking like the worst cheapskate in Met history.

Map of the Metropolitan Museum of Art