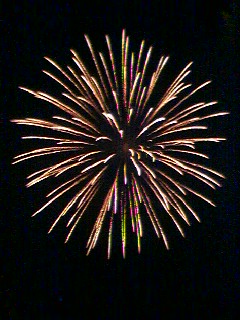 Happy Independence Day weekend! If you’re thinking about heading to the Big Apple to see the big show – that is, the Macy’s 4th of July fireworks display – I just wanted to let you know about a recent change in the launch location from the East River to the Hudson River.

Manhattan being the (most crowded) island that it is, the fireworks are usually set off from barges set up in the middle of the East River. But starting with Independence Day 2009, they’ve moved it to barges in the Hudson River. This means that instead of FDR Drive being closed and Brooklyn brownstone rooftop parties being prime real estate, now it’s the West Side Highway, Riverside Drive and New Jersey.

Y’all probably know this already, being the savvy travelers you are; but if you’re using a guidebook that’s even a year old, it was written sometime in 2008 and it might have the wrong information. We didn’t want you looking at a dark sky while everyone on the west side is ooh-ing and aah-ing!

Here are some quick tips for the best viewing results: