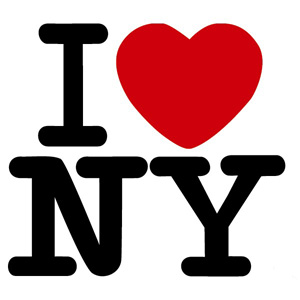 We’ve all seen it. In New York, not in New York, on kids, on grandmothers, on dogs… You’ve seen it donning shot glasses and postcards, printed on white t-shirts and found in official brochures. No matter who you are or where you live, you’ve inevitably run across the iconic “I ‘Heart’ New York” logo. But where did it come from? And how did this simple design become such a popular culture icon?

The “I ‘Heart’ New York” rebus logo was actually designed by well-known graphic designed Milton Glaser in 1976. As it turns out, the logo was originally produced after the Deputy Commissioner of the New York State Department hired an advertising agency to design a campaign that would promote travel to New York City. The Deputy Commissioner also recruited Milton Glaser, a well-known graphic designer to work with the ad agency to create a logo. At the time, morale and tourism were at an all-time low in New York City, and the campaign was launched in an attempt to boost the state out of the slump. The result was the “I” followed by a red heart symbol and the capital letters “N” and “Y” in slab serif typeface that has become a veritable pop-style icon with wild success, and which Glaser actually did for free. In a 2003 interview, Glaser said, “I have to say that when you do something that you really feel is useful—when you have a positive social effect—it makes you feel great,” who to this day is not upset that he never received a penny for his iconic logo.

Today you can find both licensed and unlicensed versions of this logo on everything you could imagine—t-shirts, shot glasses, bibs, snow globes, dog bowls, you name it. The logo has even inspired slang, with expressions based on the literal reading of the logo becoming a facetious way to express your affection for something (i.e. “I heart you.”)

If you find yourself in New York, you can pick up a “I ‘Heart’ NY t-shirt for about $5 in Time Square, and you too can be a part of the tiny logo that made such an impact on popular culture and New York City.