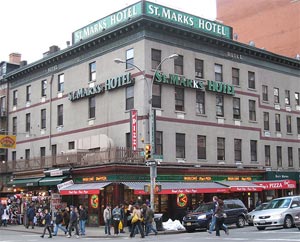 If you’ve visited various other American cities, forget everything you know about the hotel situation elsewhere. New York City hotels are another world and they play by their own rules. Europe is a better example, since even expensive New York City hotels tend to have small rooms. And unfortunately, the standards for cheap hotels in New York City are lower than almost anywhere else in the country.

Which area to stay in?

Sadly, the area with the majority of the hotels in New York City is not really a good neighborhood, especially if you want to see what the real New York City is like. Probably two-thirds of the hotels in the city are crammed together within a half-mile radius of the center of Times Square in Midtown Manhattan. In most cities that would be helpful since having all the key traveler resources in one area is convenient, but in New York City, the area businesses tend to get so much traffic from short-term visitors, they usually charge a fortune and offer poor quality.

If you can find a suitable New York City hotel in a neighborhood of Manhattan that ISN’T near Times Square, you’ll almost certainly be better off. There has been a welcome trend in the last few years to open hotels in different Manhattan neighborhoods. Throughout this guide we’ll tell you about the different neighborhoods and what they offer, but as a quick intro the Upper West Side, the Upper East Side, and Greenwich Village all have hotels and much more to offer the visitor than Times Square does.

There are a handful of hostels in New York City so you should check out information on those if you are a real budget traveler. Several of them have private rooms, which is a great way to save money and have privacy at the same time.

Most of the other cheaper hotels in New York City are in the Times Square area, particularly on the blocks west of Broadway. This is the worst part of the Times Square area so try to find something elsewhere. It’s not that it’s particularly dangerous or run-down, although it used to be both those things, it’s just that there is nothing worthwhile near there, other than Broadway theaters.

There are some places with shared bathrooms in other areas of Manhattan, and these tend to be very affordable by NYC standards. These are rare in the United States outside of New York City, but they can be a great way to save some money in a city where most things are really expensive, and people tend not to spend too much time in their hotels anyway.

New York City is home to dozens of famous 4 and 5-star hotels so if your budget isn’t tight there will be no problem finding a nice room. There is a string of luxury hotels on Central Park South, if you don’t mind paying $500 and up per night. Still though, rooms tend to be on the small side compared to the rest of the country and even other large American cities.

How to get the best deals

New York City hotels tend to play a lot of games with their prices. That tends to be the case in the rest of the country as well, but in NYC they sometimes take it to a higher level. Prices for the same room in the same hotel might be $199 on one website and $350 on another. Then a week later both prices have changed dramatically.

The best advice is to book early. New York City hotels tend to book their rooms as airlines book their planes. In other words, the first 20% of the rooms go for one price, then the next 20% of rooms go for a higher price, and so on. Some places do have good last-minute deals, but they aren’t as common as we’d like. It really pays to look for hotel deals in New York City.

If you know the dates you’ll be in town, you are usually best off checking out all your options as early as possible, and then booking one. On the off chance the room goes down in price, you can get the lower rate if you contact the hotel. But more often than not the rates just keep going up.

Should you stay outside of Manhattan?

No, not if you can help it. Probably 95% of everything you want to see is in Manhattan, and spending a lot of time going back and forth is a big waste of time, and still won’t save you too much money. New York City is exhausting for almost everyone, so to have a convenient room to easily return to for a quick nap or shower in the middle of the day is a luxury worth paying for.

If there were other pockets of reasonably priced hotels in good non-Manhattan neighborhoods then it might not be such a bad idea, but at this point there aren’t. There are some hotels in Brooklyn and Queens, but not in neighborhoods that are interesting to tourists. There are loads of hotels near all three airports (including Newark) but each of them takes an hour or more of travel time each way, and probably $10 per person each way at a minimum.

Book early, stay in Manhattan, but avoid any place that brags about being in or very near Times Square.