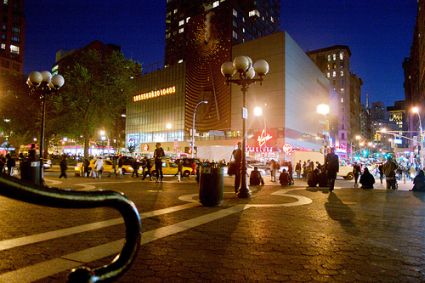 While many tourists coming to New York may think of Times Square as the landmark they’d like to stay near in New York, those seasoned travelers to the Big Apple know that there are many more areas of the city that offer a great centralized location in Manhattan while allowing visitors to escape the tourist mayhem that often clouds Times Square. For those who are looking to be close to all that New York City has to offer (without being close to giant Olive Gardens and the MTV studios), finding a hotel near Union Square may be your best bet. Not only will you be located in the heart of Midtown Manhattan, but you’ll also be just blocks from the trendy West and East Village, bar packed Lower East side and Gramercy Square.

While most of the hotels that are located close to Union Square will cost you an arm and a leg, the Chelsea Inn gives guests with a tighter budget a great location at much more affordable prices. While you certainly will not be able to enjoy the luxury that you at say the nearby W or Gramercy Park Hotel, the Chelsea Inn is located just steps from many of New York’s best and well-known neighborhoods. The hotel has rooms both with private bathrooms and rooms with shared bathrooms for even less. Those looking to stay in the heart of it all and find a cheap Manhattan hotel, the Chelsea Inn is a good option.

Although not located just adjacent to Union Square, those looking for a mid-range hotel in New York can opt for the Ramada Inn in Midtown. The Ramada Inn Midtown is located at 30th Street and Lexington Avenue in New York City, N.Y. Part of the Murray Hill neighborhood, the hotel is one half mile from the Empire State Building. Fifth Avenue, Times Square and United Nations headquarters are one mile from the hotel. The nearest subway station is located approximately six blocks from the hotel at 28th Street and Park Avenue South. The hotel offers guests complimentary continental breakfasts. The fitness center includes cardiovascular and weight training equipment. Guestrooms feature complimentary wireless Internet access and video game consoles. Complimentary daily newspapers are available.

Those looking for both a chic and affordable place to stay near Union Square will be delighted to find Hotel 17. Newly renovated and located in Downtown New York near the East Village, Greenwich Village and Washington Square Park, it is no wonder that stars like Woody Allen ad Madonna have chosen to stay at this hotel. This hotel is also located just three blocks from the Union Square subway station.

The Union Square Inn is a small boutique hotel with 41 different and charming rooms. Situated in a landmark building close to Union Square and all of the hub-bub of Midtown, this hotel offers a great location, comfortable accommodations and a charming, unique vibe. The hotel is also just minutes from many major New York hot spots like the East and West Village, Times Sqaure, Gramercy Park and SoHo.

Located in the center of Greenwich Village, the historic Washington Square Hotel is located across from historic Washington Square. The Art Deco hotel, built in 1902 and expanded in 2002, features a re created original facade, while mosaic artworks by co owner Rita Paul adorn inside walls. The hotel includes a fitness center and massage room. Complimentary continental breakfasts are provided. High speed Internet access is available in the lobby and cafe. The 170 guestrooms provide views of Washington Park, the Empire State Building and West Side. Washed in subdued palettes, the guestrooms include desks, cable television and data ports.

Ringed by the essentials—shopping, music art—W New York Union Square’s landmark 1911 beaux arts Guardian Life building, re-invented by David Rockwell, guests in the swanky W Union Square offers sanctuary, with comfort in every corner for those who need a place to escape from the hectic city life bustling outside. The hotel is also located just steps from many of New York’s most visited attractions and streets, making it a great place to be based during your trip to the Big Apple.

The Carlton on Madison Avenue

Located in between the Murray Hill and Gramercy Park neighborhoods, the Carlton Hotel is situated in a prime New York City spot only four blocks from the Empire State building, 5 blocks from Penn Station and Madison Square Garden, less than a mile from Times Square and Radio City Music Hall and 2 miles from Central Park. If the location isn’t enough to sell you on this hotel, perhaps the Champagne lounge or doomed Tiffany style skylight will.

Those looking for a smaller, boutique hotel experience in New York will be pleased to find the Hotel Giraffe. According to their website, the Hotel Giraffe is an “urban oasis in the heart of New York City.” Offering sophisticated décor and1920s Art Modern architecture, this hotel offers both elegance and comfort with a great location close to many of New York’s most celebrated bars and restaurants.