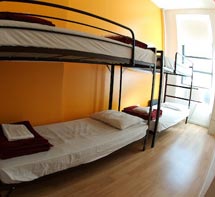 New York City is the only place in the United States where visitors have a wide selection of hostels, and that’s a very good thing. As you probably know, hotel prices in NYC general range from high to unbelievably high. New York City hostel prices are also relatively high, but for $30 to $40 per night you should at least be able to find a decent bed in a desirable neighborhood.

Another small problem is that standards tend to be low in New York City hostels, just as they are on the budget end of the hotel spectrum. If you are used to chain hotels then this is a different world. The rooms are smaller and for some reason the operators have more trouble keeping things clean than they do in most other cities. So you might ask around and hear from some people who were disappointed with their stay at a hostel in New York City, but you kind of get what you pay for here and there is no such thing as a super cheap bed in a perfectly clean room in a great neighborhood in New York City.

Which neighborhood to stay in?

Under ideal conditions, we recommend staying in Manhattan, south of 72nd Street, but outside of the general Times Square area. There are tons of New York City hostels that fit those criteria, but they tend to be on the higher end of the price spectrum. The whole idea of staying in a hostel means that you’ll probably be traveling with a somewhat limited budget, so not everyone will be able to stay in an ideal location.

New York City is expensive, so for some shoestring travelers saving $10 per night on their bed is the difference between being able to visit and having to stay away. If you are in this category, then staying in the Harlem area of Manhattan isn’t a bad idea, or the hostel in Greenpoint, Brooklyn is not too far out either.

But seriously, if you have the means to afford one of the better Manhattan locations, you’ll likely have a much better trip. Almost everything of interest to travelers is south of 72nd Street in Manhattan, but sadly the greatest cluster of accommodations is in the one area probably best to avoid – at least for sleeping purposes – and that’s Times Square, which is right in the heart of everything.

You’ll definitely want to visit Times Square, both during the day and at night to see the lights, but the neighborhood is filled with nothing but overpriced mediocre restaurants and hotels, and glitzy Broadway theaters. Even the delis and pizza places in the area are strangely expensive and soulless.

Chelsea is an ideal neighborhood

There are quite a few New York City hostels in the Chelsea neighborhood, which is just south of Times Square, but far enough away. This is an excellent neighborhood for visitors because it keeps all the famous Midtown attractions within a close walking distance, but all the great Greenwich Village nightlife is also just a short walk away.

The history and nightlife of Greenwich Village make it a fantastic neighborhood, particularly for people interested in having a few drinks or more after dinner. There are only a couple of hostels in the area, but they both have good locations. Jazz On The Town – East Village is on the northern border between Greenwich Village and Chelsea, and the Bowery’s White House Hotel is perfectly located near the center of the nightlife action. The White House doesn’t have dorm rooms, but their small single and double private rooms are within the same price range as dorms elsewhere.