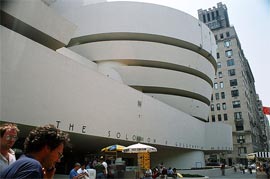 Officially called the Solomon R. Guggenheim Museum but locally just called “The Guggenheim”, this is one of the more famous and more controversial museums in New York City. The exterior design of the building is probably more famous than anything inside of it, and that notable look has at least as many detractors as it does fans. This is a modern art museum, which also makes it something that many people will not appreciate. If you are looking for classical art you are better off spending even more time at the Metropolitan Museum of Art, which is just a few blocks away.

A brief history of the Guggenheim

Solomon Guggenheim was from a wealthy mining family, and later in life he became a serious art collector. He commissioned famous architect Frank Lloyd Wright to design his New York City modern art museum, while his collection was kept in a temporary museum location. Guggenheim died in 1949, and the new building was finally built between 1957 and 1959. When it opened it cost only 50 cents and now it costs $18 for adults.

What you’ll see inside 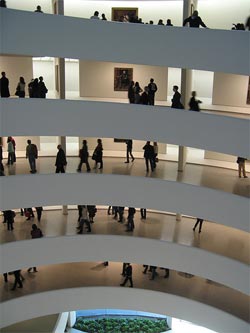 This is a modern art museum with a huge collection, much of it originally belonging to Guggenheim itself, although many newer works have been purchased and donated. Pablo Picasso, Vincent van Gogh, and Marc Chagall are three of the most famous “modern artists” so if you are fond of that sort of thing you’ll probably enjoy this collection. You’ll also find works from Paul Cezanne, Fernand Leger, Paul Klee, Robert Mangold, Jackson Pollack, and Richard Serra, among others.

The interesting part of visiting this teacup-shaped museum

Most of the works are displayed along the walls where an extremely long ramp winds up the entire inside of the building. Many who visit get as much of a thrill from riding up the elevator and then walking down the spiral ramp all the way as they do from actually looking at the paintings.

Friday evenings are free, sort of

One evening per week, the Guggenheim joins many other NYC museums by offering free admission with a “donation.” Here they call it “pay as you wish” so they are hoping you might pay quite a bit, but plenty of cheapskate locals will offer up $1. Promotional times like this always get really crowded, so if you have your heart set on seeing this museum it might actually be better to come any other time. Lines to get in are long and the ramps will be swamped every Friday evening.

The Guggenheim is just a few blocks north of the Metropolitan Museum of Art. The closest subway line is the Lexington, where you can catch the 4, 5, or 6 train, and get off at 86th Street. From there you’ll walk 3 short blocks west and 3 short blocks north, to 5th Avenue and 89th Street.