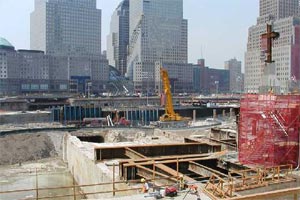 The term “ground zero” used to refer to the exact site on earth where an explosion occurs, but now, of course, it’s permanently linked with the site where the World Trade Center towers used to stand up until September 11, 2001. For all the years since, ground zero has been a fascination for visitors to New York, even more so than the twin towers that previously stood on this 16-acre site.

What is there to see?

For the first few years there was nothing more than a large hole in the ground where they were excavating rubble from the fallen buildings and preparing the site for something new. That didn’t discourage tourists who flocked to the area anyway, but in 2006 a temporary museum and memorial opened, which actually gives visitors something real to see.

This new memorial attraction is located at 120 Liberty Street, just south of the construction site. They have five galleries that display the sad history of the events, along with the rescue and heroism that took place in its aftermath. It’s estimated that visiting takes about an hour. It’s open from 10 a.m. until 6 p.m., but there are shorter hours on Tuesdays and Sundays. The suggested donation is $10 per person, but just as with several museums in New York, you can pay less or nothing at all if you prefer. Check the official website for details.

A 75-minute walking tour or the area is given 4 times per day, with two additional tours on Saturdays. The price is $10 per person and tickets can be purchased from the Visitor Center, which is also where the tour group gathers.

After several years of often-embarrassing arguments over how and what should go up in the place of the World Trade Center, progress is finally underway. The main attraction will be the 1776-foot Freedom Tower, which will be significantly taller than the Twin Towers stood, although much of that is due to the giant antenna planned for the top. The foundation began being laid for the Freedom Tower in mid-2006, and by the end of the year steel girders were going up. The steel will finally peek over ground level sometime in 2008, and completion is currently set for 2011.

Five other new towers are also under varying degrees of planning or construction on the site. The new Tower 2 and Tower 3 will each be over 1,250 tall, and the other three will range from 750-feet to 975-feet tall each.

Some of the most-bitter disagreements for the site were over the possibility of building a memorial and/or museum within the new complex. A museum idea called the International Freedom Center was planned and now appears to be scrapped completely.

A memorial going by the name Reflecting Absence was planned for the site, but its fate is still up in the air. The budget had swelled to $1 billion for the memorial alone at one point, which would actually be more expensive than the cost of the original Twin Towers in today’s dollars.