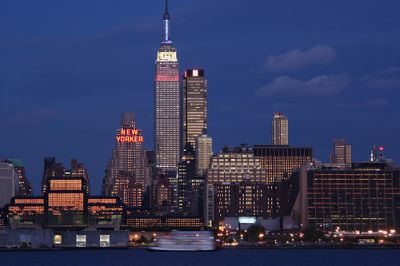 If you are looking for a reason (or excuse) to go to New York, now is probably the best time to squeeze in a trip to the Big Apple. As it turns out, NYC and Co, the tourism and marketing arm for New York City, has partnered with American Airlines and announced a fare sale in efforts to lure more travelers from five major U.S. cities to the Big Apple. This means there are some absolutely fantastic deals on cheap flights to NY right now from around the country—including just $109 each way from Los Angeles for travel Sept. 15 through December 12, 2009.

Now, before you go popping open bottles of champagne and toasting these low airfares, you may want to take a little peak around the internet at what else is out there. In fact, according to an article from the Triangle Business Journal, holiday air travel is expected to cost 17% less this year and airfare to big, competitive markets like New York seem to be especially cheap.

BootsnAll friend Jen Leo from the Los Angeles Times writes that because other airlines like Southwest, Delta and Virgin America have been offering such goof fares as of late, the $109 airfares “didn’t sound like an earth-shattering deal,” a suspicion that was confirmed by the CEO of FareCompare, Rick Seany.

However, if cheap airfares and good travel deals to New York aren’t enough to lure you to the city, then maybe the beautiful fall weather will. In a city not particularly known for its great weather, fall is actually one of the most beautiful times of the year to visit. By September it’s usually cooled off enough not to be so sticky hot, but the chill of winter has yet to set in. The fall months are when you’ll enjoy often sunny skies, changing foliage in the park and baseball games at the new Mets and Yankee stadiums.

Another good reason to head to New York this year? With many Americans cutting back on travel plans in light of economic woes, there are lots of hotel rooms that need to be filled. This means that in a city notorious for expensive hotel rooms, you can often find a great deal on a hotel. If you want to save even more money on your accommodations, you can either opt for a staying in a hostel or venturing across the bridge and staying at one of the hotels in Brooklyn. There are also plenty of great things to do in Brooklyn for those interested in exploring New York beyond Manhattan.

If you are a bit of an exhibitionist and are looking for a way to flaunt your stuff when visiting New York, the Standard Hotel in Manhattan is the place to stay. Apparently some guests at the hotel, which features floor to ceiling windows and won an award for best new building erected last year, have been failing to close the curtains as they frolic about their rooms naked. This means park goers in the nearby elevated High Line Park have been getting an eye full. (Read the full story here)

The best part of the whole story? While a City Council Speaker deemed the naked hotel guests’ behavior “unacceptable” one neighborhood resident said the free naked shows (which remind me a little of scenes from the girls in the windows in the Red Light Distric) were “healthy and fun” and were a lot like watching “Wild Kingdom” on television.

So, if nice weather, cocktails and concerts on the observation deck at the Top of the Rock and big, cheesy slices of New York pizza aren’t enough to get you to New York, then maybe the possibility of a free peep show outside of the Standard Hotel will.