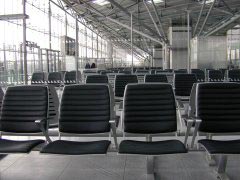 Since New York City is the biggest in the country and such a transportation hub, we’ve decided to help out those who might not be familiar with the options by explaining the choices. There are three major international airports with 20 miles of the city, so the number of flight options are vast, but this is also the busiest hub for the only decent rail network in the country. You’ve also got quite a few new bus options and if your budget is limited you’ll be shocked by how cheap some of these tickets can be.

For example, people often wonder about flights from Chicago to New York since these are two of the biggest and busiest cities in the country, and while those flights are plentiful, you’ve also got the option of trains or even buses. You can also get a cheap flight from Detroit to New York if you want to visit that devastated city before you check out NYC, but again, there are more options available if you aren’t in a big hurry and you want to save some money.

We’ll be adding more cities to this list in the future, so stay tuned.

Getting between New York and Boston is a breeze and you’ve got cheap flights and fast trains, in addition to bus fares that start at literally $1 if you buy far enough in advance, and all the options take about the same amount of time when you add everything up.

Getting between Washington DC and New York City is another one where you have a dizzying amount of options, especially when considering all the new low-cost bus services. You can fly cheaply or take a fast train that usually costs a bit more but is often worth it since it’ll get you there quicker than flying and it’s just more civilized than all that airport hassle on both ends.

Getting between NYC and Atlanta can be slower than you’d expect unless you fly. Often the nonstop flights are not the cheapest, but fortunately a quick stop in Charlotte can usually save you money. Trains and buses are slow and not cheap, so driving isn’t a bad idea if you have access to a car.

Getting between Miami and New York gives you all the same options as the trips above, but in this case flying is much faster (of course) and usually even cheaper than the train. This is such a popular air route that finding nonstop flights that are around $99 one-way is usually a breeze, and sometimes that’s even at the last minute.

This is kind of an unusual one compared to the rest. Getting from NYC to Chicago is easy, and flights are obviously the fastest option, but in this case the buses are a bit faster and a bit more expensive than the trains, even though they all go more or less the same route. Driving yourself will cut about 5 hours off the train or bus journey, so it’s something to consider.

One of the more confusing journeys to make, unless you know both areas, is getting from New York to Niagara Falls. The trains and buses are slow and indirect, but flights tend to be cheap and fast as long as you know which airports to use on both ends.

Those who are feeling lucky or those who want to see an absurd combination of wealth and poverty just blocks apart will be happy to know that getting from New York to Atlantic City is quite easy. The buses in particular can be great bargains, and the journey takes about the same time no matter the method.

More cities will be added soon.