Getting from New York to Chicago (or the other way around) 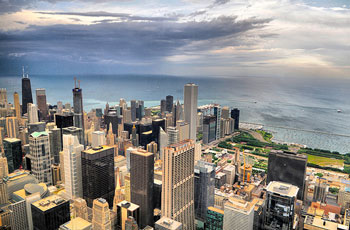 Chicago is this country’s third largest city and it’s quite underrated as a travel destination, according to many of its fans. Whenever someone is coming over from abroad it’s highly recommended that they include Chicago as one of their US stops, even if only for a couple days. Getting between New York City and Chicago is pretty straightforward, but there are many options to consider. Below we’ll go over all of them.

Unless you are afraid to fly, your best option will almost always be doing this journey by air. There are nonstop flights leaving almost every hour around the clock, and the flights tend to be cheap as well, as long as you buy a bit early, and sometimes even when you don’t. The train is civilized and usually about the same price as a cheap plane ticket, but of course it takes almost a day. The buses are a bit faster, strangely enough, but no cheaper. Driving might be your best ground option if you have access to a car.

Though you’ll obviously miss all the scenery, the most popular way of getting between these two huge cities is to fly. Fortunately, this is an extremely busy route with loads of competition, so prices are normally fairly low and nonstop flights are always easy to find.

Thanks to American Airlines having a busy hub in Chicago, they fly nonstop between there and LaGuardia Airport in New York at least every hour or so each day, during the day, of course, but also a few night flights as well. JetBlue and Delta both fly into JFK from Chicago, and between the two of them you can usually get a really good deal if you buy in advance. (Fly JetBlue if you never have before. It’s nicer.)

The United States is notorious for its poor train coverage from coast to coast, but fortunately the New York to Chicago route is still a busy one so you’ve got quite a few choices on Amtrak, the national train service. You can take a direct train between the two cities, or if you prefer to go at a different time of day you can connect either in Pittsburgh or Chicago. The Pittsburgh connection, which usually leaves in the late morning, actually adds up to the same amount of time as the direct one, since it’s right on the way. The Washington DC option will add about 2 hours to the journey, which still isn’t terrible all things considered.

Journey time: 19 hours each way (or 21 hours if you connect through Washington DC)
Standard fare: $84 each way, and up. Discounts may be available for students, seniors, or AAA members etc.

Recently there has been an explosion in bus companies that are competing with the national carrier, Greyhound, and usually offering fantastic fares to try to gain market share, but unfortunately none of them is going between Chicago and New York, yet. That means you are stuck with Greyhound, and if you aren’t from the US you may not be aware that the bus company doesn’t have a great reputation among locals. It tends to be efficient and affordable, and usually on time as well, but the class of people who generally ride these long distance buses are not always those who represent the country’s best and brightest particularly well.

The good news, though, is that this bus is actually a bit faster than the train, assuming they both run on time. This route usually goes overnight, and the seats are fairly comfortable and large, so hopefully you can sleep though half the journey at least.

Journey time: 17 hours 30 minutes if you take the direct bus. It’s longer if you take one that connects along the way.
Normal fare: $85 each way if you buy in advance on the internet, and a bit more if you don’t.

If you’ve got a car or are willing to rent one, this might be the best method of all, especially if there are more than two or so people going at the same time. As you can see near the top, the driving distance is about 790 miles, and it can be done in about 12 hours if you don’t dawdle much along the way.

The scenery between the two cities is varied and generally interesting, but you will have quite a few tollbooths to stop for almost the entire way across, and those can get annoying if you are in a hurry.

You also have to figure the city traffic into your time. For example, if you are starting in Midtown Manhattan, it might take you literally an hour to get just a few miles north where the I-80 starts. And Chicago has its fair share of traffic as well, so you might want to time this trip to avoid both the morning and afternoon rush hours if you can pull that off.