Getting from New York to Boston (or the other way around) 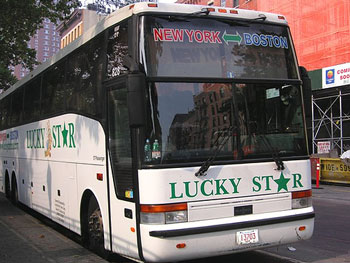 Two of the largest and most famous cities in the United States are deceptively close together, but that doesn’t mean getting between them is particularly easy. You’ve got at least 4 good options, and it’s probably a good idea to investigate at least two or three of them before you commit, because prices and availability can be very uneven depending on when you want to go.

Flying between the two is the fastest way, but not by much when you add in the time getting to and from airports and time waiting. The trains are reasonably fast and a great option, especially if you don’t want to deal with the airport scene. Buses can be amazingly cheap, but not if you want any kind of luxury, and they are a bit slow as well. Driving yourself can be the best method if you have a car, but traffic can be a nightmare on both ends.

Flights between New York and Boston

Considering how close these cities are together, the airfare is a bit on the high side. Fares usually start around $75 each way and go up from there, but sometimes there are promotional fares that range between $50 and $69, so it’s not a bad idea to check your dates on a fare search anyway.

Flight time: About an hour, nonstop (anything other than nonstop for this route is insane and really slow)

JetBlue flies nonstop between JFK and Logan many times each day, for low prices.

Trains between New York and Boston

Amtrak runs frequent trains between the two cities, but the walk-up fares can be even more expensive than flying, so the trick is to buy your ticket at least two weeks in advance. Unlike most of Europe, the prices on this route can change depending on when you buy the ticket.

You can sometimes find promotional fares between the cities, so it’s not a bad idea to check, though they typically only apply if you buy 14 days in advance or more.

Buses between New York and Boston

Until a few years ago, your options for buses were the infamous Greyhound national carrier and the dubious and cheap Chinatown buses, but things have changed and now there are several new companies competing for your business, some with amazingly low promotional fares.

Travel time: 4 hours 30 minutes for most buses, but traffic can slow them down

Greyhound buses – These leave many times throughout the day and night. If you buy online in advance you can get fares as low as $22 each way, or as high as $45 each way for a refundable ticket.
>>Greyhound bus site

Check all bus fares at once – A new bus fare search engine has help sort out all the new bus companies, and will display the best prices all in one place. Fares start as low as $1 (seriously) and are often below $15 each way.
>>Busjunction bus search site

The driving distance is only 215 miles so you can make the trip in under 4 hours if you drive in the middle of the night. But these are traffic-heavy cities so if you are going during daylight hours at all it could take 5 or even 6 hours, with much of that spent inching along in a city itself. There isn’t much good scenery along this route, so it’s not really a classic road trip, and the highways will be crowded the whole way as well.