Getting from New York City to Niagara Falls 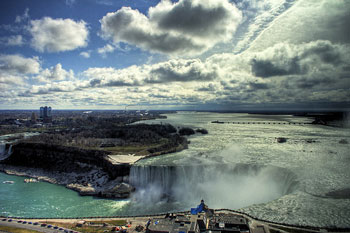 There’s no doubt that Niagara Falls is one of the premiere tourist destinations in the New York area, not to mention the Toronto area that is far closer, but figuring out the best method to get between the two places can be confusing. We’ll go through them all below so you can decide on a flight, train, bus, or your own car.

At these distances apart, flying is going to be the fastest method, even including the airport stuff on both ends. Fortunately, flights tend to be fairly cheap if you buy in advance. The train or bus is scenic and rather slow, but usually a bit cheaper than flying and you can still get there in one day. Driving is probably the best option for anyone with at least 3 people, as it’s pretty quick and even if you rent a car it’s still probably cheaper, plus the car will come in handy at the falls.

For most people, a flight between the two areas is going to be best, but it can also be confusing if you don’t know the specifics. There are actually four airports within easy range of Niagara Falls, though only one of them is the best choice from New York City. There is, in fact, a Niagara Falls International Airport, but there are no scheduled commercial flights these days, so just forget it.

Instead, Buffalo Niagara International Airport (BUF), is the best choice, with frequent and cheap non-stops. This airport is only about a 40-minute ride from the Falls and there are plenty of shuttle and taxi options available.

Typical price: $160 round trip is a normal sale price, and if you buy far enough in advance you should be able to get something around that price. Search NYC to BUF in the box above for all New York airport options.

It isn’t as direct as it could be, so it takes a bit longer than driving or taking the bus, but there is a train that connects the two places. Amtrak’s Empire Service goes directly in a bit over 9 hours, usually leaving 3 times during the day.

There are Greyhound buses that connect these two areas, but they are slow and take a weird route, so you can expect either a 10-hour journey or a 13-hour journey, each way, depending on which bus you take.

Greyhound has aggressive discounting of tickets if you buy online in advance, so if you know your dates that’s a big key.

Normal fare: $44 each way online, up to $71 each way in person
>>Greyhound official site

The driving distance is 410 miles and it’s quite scenic, though New York has this annoying thing where they line the sides of major highways with identical trees, so during parts of the drive it’s like going through an endless tunnel. The drive should take about 7 hours each way, and maybe a bit less if you don’t get caught up in traffic on your way out of New York City. It’s unlikely that you’ll hit any traffic problems until you reach your destination.