Getting from New York City to Atlantic City 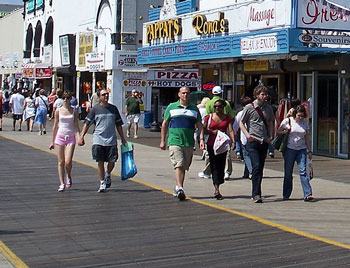 These two cities are fairly close together, but still until recently it’s been a bit of a hassle getting between them, unless you don’t mind piling aboard one of those casino buses filled with passengers who barely look human. You’ve got quite a few options here, so let’s go over them together, shall we?

There are no direct flights and it’s too short of a distance anyway. The new train service is the most comfortable and civilized way of getting between these two cities, but if you are looking for something cheaper then think about a bus. The journey takes about the same length of time, and you can go for as little as $15 roundtrip, not including some casino cash you might get.

I’m just putting this here in case anyone was curious. There are no non-stop flights between any of the major NYC airports and the Atlantic City airport, and even if there were it would still take longer than any other method, with security and waiting times and all. If you happen to just love flying around, you can take AirTran from LaGuardia to Orlando and then to Atlantic City in about 6 hours for about $170 each way.

Starting not long ago, New Jersey Transit begun services called ACES, which goes directly from New York’s Penn Station and Atlantic City’s Express terminal. The journey takes around 2 hours and 40 minutes and goes only on Fridays, Saturdays, and Sundays, although the normal Amtrak schedule seems to go every day of the week for the same fare and on the same schedule, so it’s difficult to tell exactly who is doing what.

The one-way fare is $29 in advance or $39 if availability is limited.

You’ve got quite a few options when it comes to buses between these two fine cities. Greyhound has special service they cheerfully called “Lucky Streak” which goes directly from the Port Authority Bus Terminal in Manhattan to the Atlantic City casino of your choice. Buses to different casinos leave at different times of day, so see the main schedule to pick your destination. The fare is usually $25 round trip and it takes about 2.5 hours each way. If you play your cards right, you’ll get a casino voucher as well.

Megabus also plies this route, with basically the same details, except tickets start at only $15 round trip, and there is free Wi-Fi aboard all their buses. You have to reserve an outbound seat, but then you’ll get a voucher for the return, which is good for up to 4 days, in case you get on a hot streak or you have to keep playing to try to get that scholarship money back.

There are plenty of cheap hotels in Atlantic City, though most of the big name casino hotels charge an arm and a leg. You can often stay just a couple blocks away at a simple place for a small fraction of the price of a big casino.

As mentioned up top, the driving distance is 126 miles, give or take a few miles. It’s a pretty straight shot, though you have two highways from which to choose. You can get directions from an online map service so I won’t get into that here, but be aware that there are tolls most of the way along either route, and those get annoying and expensive.

A friend used to take advantage of EWR parking in Newark and take a cheap and fast service from there, but that doesn’t seem to be operating anymore.