Getting from Albany to Buffalo (and the other way around) 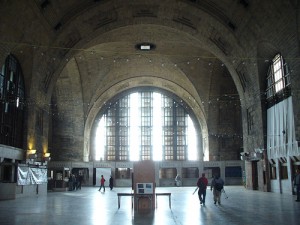 Albany is the capital of New York State and a showcase of world-renowned architecture.
Buffalo is New York State’s second largest city and the cultural and economic center of the Western New York region. Today it’s famous for its architecture and art galleries.

Although neither is as popular among travelers as New York City, visiting both cities is an interesting option for those passionate about architecture and arts. Plus, both cities offer gateways into nature reserves and other interesting things to do.

>>read more about Things to do in Buffalo

For the budget traveler – if traveling alone or with someone else – the best option is to get a train ticket for $46 one way and travel between Albany and Buffalo in about 5 hours, during the day. If there’s more than two in the party, then it’s a good idea to consider renting a car and driving the 288 miles between the two cities.

Although both cities are served by airports , Albany by Albany International Airport (ALB) and Buffalo by Buffalo Niagara International Airport (BUF), there aren’t any direct flights between the two cities.
Still, you can fly from one point to another , making 3 stops along the way and spending a total of 9 h 30 min traveling. The price? $127 one way per person.

Trains from Albany to Buffalo

Buses from Albany to Buffalo

Grayhound runs buses between Albany to Buffalo. There are five departures per day every day, starting at 12:25 a.m. The last one is at 9:45 p.m. Tickets cost $66.50 one way for an adult. The travel time is between 5h 30 min and 7 h 25min (with a connection).
Tickets can be bought online.

Driving from Albany to Buffalo

The shortest driving route – according to Google Maps – between the two cities is 288 miles on I-90 W. You should be able to cover it in about 5 hours. So , rent a car , pack some healthy snacks for the road and enjoy the road trip.