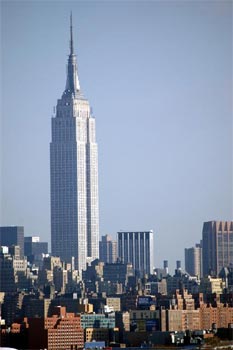 The Empire State Building was King Kong’s demise, but even still it is one of the most popular tourist attractions in New York City. It was completed in 1934 and was the tallest building in the world from then until 1972. Sadly, since 2001 it’s again the tallest building in New York City, and on clear days the views from the observation decks at the top can be spectacular.

The art deco-style Empire State Building stands 1,250 feet tall with 102 stories, and an antenna on top adds over 200 additional feet to the structure. The only buildings that are even close in height are about a mile north, so it really dominates its part of the famous Manhattan Skyline. Ironically, from the streets below it’s often impossible to find it until you are within a block or two.

The Empire State Building is mainly just an office building, and surprisingly it’s not really even a prestigious one. Most of the tenants are older low-profile companies paying low rents on long-term leases. The only thing worth doing in the building is riding an elevator up to one of the observation decks near the top.

The main observation deck is on the 86th floor, which is where most visitors go. This is the one featured in An Affair to Remember and Sleepless in Seattle. This is a large open-air deck that offers 360-degree views of the city. It does occasionally get foggy or murky in New York City so keep track of the weather during your stay and try to time your accent for the clearest weather for the best views.

There is another enclosed observation deck on the 102nd floor, but it takes an additional $15 to get up there on top of the high fee for getting to the 86th floor.

The observation deck is open from 8 a.m. until 2 a.m. every day, including holidays.

This is another New York City attraction that has had to impose airport-style security. Bring as little with you as you can and be prepared for a thorough search. There are three lines you have to conquer to even get in the elevator.

Are available from the box office for $7.

If you are super rich and/or super crazy

For $45 you can skip to the front of all three lines. Don’t blame us if people boo you or make fun of you if you try this.

A couple years ago an observation deck opened on the top of the General Electric Building in Rockefeller Center. It’s on the 70th floor and the prices are similar, but the crowds and security are much easier to deal with, and many people say that the views from Top of the Rock are actually better. It’s hemmed in between the most interesting part of Midtown, but the tallest building in the area, and views of Central Park are possible, which they are not from the Empire State Building.