Combine your NYC holiday with a Canadian side trip

I’ve visited London countless times and I always love to go back, but I have to also admit that the place really wears me out. On more trips than I care to remember I’ve booked myself 2 weeks in London and then taken a side trip (usually to Amsterdam) to just refresh myself before I get burned out. It’s in that spirit that I recommend that visitors from Europe or anywhere else that is some distance away from New York consider a quick trip to one of Canada’s fine cities to cleanse the palette a bit.

New York City is too intense for a long holiday 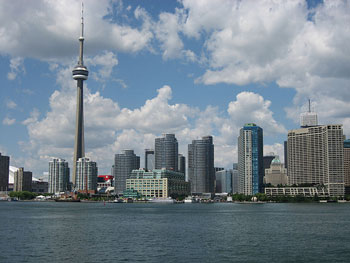 I used to visit NYC many times before I moved here for the first time, and I remember that feeling that about 3 or 4 days in I felt like I needed a vacation from my vacation. It’s true that New York City is so densely populated and so crowded all the time that there is just no escaping it until you leave. Your hotel room will be very small, and even if you go out into Central Park for a quick breather, you’ll never be able to forget that there are literally millions of people within a mile or two from where you are trying to rest.

The other unfortunate part of this equation is that there really isn’t much that is all that worthwhile in the surrounding area. Believe me, I’ve looked around, and unless you want to pay a fortune to get out to the Hamptons, and it also happens to be summer, then you have to go at least 100 miles or more to find a change of scenery that is worth the trip itself.

Getting to Canada is faster than easier than you probably think

Sort of like how I used to travel to Amsterdam for a different vibe, I recommend people consider heading to either Toronto or Montreal for a refreshing change of pace that might actually come close to topping the NYC part of your trip.

It’s much too far to drive yourself, unless you just love road trips, but fortunately flights to Toronto are usually cheap. Since New York has 3 airports and there are loads of airlines flying this route, it’s rarely tough to get a good deal. Right now I’m seeing many deals for around US$230 for a roundtrip, and the flight itself takes a bit under 2 hours each way as long as you find a nonstop.

Going from by far the largest city in the US to by far the largest city in Canada may not sound like much of a contrast, but it really is. You’ll find that Toronto is cleaner and actually much better organized for tourists. There are plenty of cheap hotels in Toronto as well, unlike in New York, and the difference in the money you pay up there versus what you are paying in NYC will probably make up for the cost of the flights.

The downtown Toronto area is packed with hotels, and if you go just one district south of that (an easy walk), you’ll be in the entertainment district, where clubs and lounges and restaurants are all clustered together among some interesting and often affordable hotels.

You certainly know that Montreal is mostly a French-speaking city, and in some ways it can be more complicated to deal with that than if you visit Paris. It’s a really beautiful place with a stunning and very European-looking old town area, but Montreal doesn’t get nearly as many visitors as Paris, and they tend to be more hesitant to speak English there unless they are really good at it. You won’t have any problems getting around, but it can be a bit frustrating at the same time.

That said, Montreal is definitely worth a visit if you can pull it off. You’ll find that airfare to Montreal is a bit higher than it is to Toronto, partly because there aren’t any nonstop flights between the cities, but it’s still reasonably priced considering what you get if you make the journey. It’ll take about 3.5 hours each way, usually with a quick stop in Philadelphia or thereabouts.

More good news comes in the fact that hotels in Montreal are also usually quite affordable compared to NYC. It’s not what you’d call a cheap city, but hotels in particular will cost much less than the same type of place in New York. The whole city center is small enough to walk, though the public transportation is very efficient in case you have bad weather or you didn’t bring the right shoes.

Speaking of bad weather, Montreal is one of the many places in Canada where they have an Underground City, so even in a major blizzard you can just go one level below the street and still be able to get halfway across town and do some shopping and hit all the best restaurants and bars. You won’t be sorry if you give it a try.