Particularly for Europeans and other foreign visitors, a trip to New York can be a great opportunity to buy something expensive for much less than you’d spend back home. Even people from the United States and Canada can find really good bargains on electronics items in New York City, but it’s also easy to get ripped off, so here is how to make sure you are getting a good deal.

Where NOT to buy electronics in New York 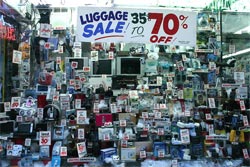 It’s very possible that wherever your hotel or hostel is, you are no more than a few short blocks from several small electronics shops that have huge signs out front intended to make newcomers think they can get an amazing deal there if they hurry. The city has cracked down on places that perpetually advertise “going out of business” sales, which literally used to go on for years. But these small stores have new tricks up their sleeve to make you think your timing is perfect and major discounts are waiting just inside.

Times Square and the area along Broadway just south of there has loads of these shops, and they are also downtown on Broadway, near the South Street Seaport, along 8th Street in Greenwich Village, and a few other places in town. There might be a couple good ones mixed in, but generally it’s not worth the risk since these places are famous for lying about retail prices (saying a $500 camera is half off at $250 when the actual retail price is $250 and it’s even cheaper elsewhere), and selling reconditioned or “gray market” products that won’t have a warranty and might not even work right when you buy them.

Where to make sure you are really getting good deals 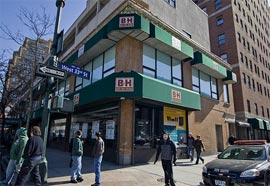 This huge and independent store also has a busy website, so it’s very easy to check prices and availability before you get here. B&H is unusual in that it’s always jammed with customers, and the sales staff can’t quite keep up, so it’s hard to get a lot of great advice most of the time. If you know what you want this is almost always the cheapest place in town, and they have a great reputation, but if you are coming just to browse a bunch of things it might not be ideal. Nearly all employees are orthodox Hacidic Jews, so don’t let that freak you out when you get here. Due to that they close at 2pm on Friday and don’t open again until Sunday, so plan well ahead. They aren’t too far from Times Square, but you still aren’t likely to find the place by accident, so plot it on a map.

This place is a bit more of a traditional store with plentiful sales people, but they still do have good prices. Their older and larger store is way downtown near City Hall and not far from the Southstreet Seaport or even Ground Zero. They also have a good website where you can check prices, so it’s easy to compare these places. They recently opened a smaller store near Macys in Midtown, but if you want the full selection and the best chance of a bargain you should go to the Downtown store.

Other places to try

These places usually aren’t quite as cheap as the above two, but they always have sales on and you can be sure you aren’t getting conned at them. They are almost always a better choice than a one-off small shop that has prices that seem too good to be true.

Best Buy – This giant chain is all around the world, but their American locations do have great bargains by most standards, their salespeople are usually helpful, and you know you won’t get ripped off. They have 6 Manhattan locations, which can be mapped on their official site.

Circuit City – Same exact deal as Best Buy above, and they’ve got 3 Manhattan locations you can find on their official site.