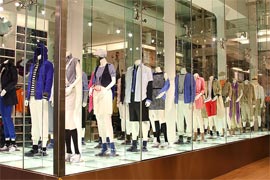 With real estate and rent prices being so insanely high in New York City, it’s a wonder that clothes don’t all cost double here just to help pay for the retail space. The good news is that in most cases prices on clothing in New York City are comparable to most of the rest of the United States, and that makes things quite cheap when compared to most other countries, especially in Europe and East Asia.

The big department stores like Macy’s and Bloomingdale’s always have various sales going at any given time, and if you get lucky you might find some real bargains there. Manhattan is also filled with chain stores like Gap, Old Navy, Filene’s Basement, and American Eagle, and those places also have constant sales so they are worth checking out. But in order to find the special places that always offer bargains, you’ve got to look elsewhere.

Century 21
This one is well known to all the locals, and it’s often so crowded that some people have just given up on going. This huge store just steps from Ground Zero has a huge selection of both women’s and men’s designer clothing, but the stock on hand tends to rotate very quickly so it can be hit or miss from one visit to the next. Prices are often 50% below normal retail, but be prepared to battle the crowds and sift through plenty of unpopular items while you look for the gems. This is more for formal wear like dresses and suits instead of club wear and such.

H&M
If you are from Europe then you are probably all too familiar with this Swedish retailing giant, but if you are from North America there’s a good chance they haven’t made it to your area yet. H&M is more or less the clothing equivalent of Ikea, meaning that everything has a designer look, but the prices tend to be shockingly low. Most everything in H&M has a trendy look to it, so it’s likely to be out of style in 2 or 3 years at the most anyway. They’ve brilliantly decided to make clothes that last that long, but are not meant to last a lifetime, and they pass the savings on to you. There are now 9 locations in Manhattan alone, but not all locations carry the full women’s, men’s, and children’s lines. Check out their New York store finder for most details.

Uniqlo
This new entry to the cheap clothes scene is basically Japan’s equivalent of H&M. Clothes here are mainly cut and styled for younger people, but the prices are really low and shopping here is a unique experience if you’ve never done it before. These designs are Japanese, though almost all of it is based on trendy Western clothes, so you get an interesting mix of unusual and familiar items. Their only US location opened in SoHo only in 2006, so plenty of locals have yet to visit this large store yet.

Where to get just plain cheap clothes

If you just need to get a pair of jeans or a t-shirt, and you don’t care if it’s unusual or designed to be trendy and expensive, then you have a couple of options in Manhattan.

K-Mart
If you saw the Oscar-winning film Rain Man, then you probably remember Raymond chanting that “K-Mart sucks” over and over. Well, it’s gotten a bit better since then, and they’ve also opened two locations in Manhattan since then as well. If your goal is to just get a sturdy and cheap outfit or two, then you could do a lot worse than K-Mart.

14th Street
The absolute cheapest clothes in New York City can probably be found at the many peculiar stores along 14th Street. Even though 13th and 15th streets are both very posh, 14th Street continues to be lined with 99 Cent stores and other businesses targeting a working class (and largely Latin American) clientele. You can find t-shirts here starting around $3 each, and plenty of other items to go along with it, but don’t expect quality or even standardized sizing.