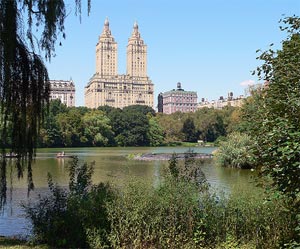 Over 25 million people visit Central Park each year, making it the most-visited city park in the United States. The famous park is one of the reasons New York City is so beloved by its residents, and also a key reason why the blocks surrounding its southern portion make up some of the most expensive real estate on the planet. Penthouse apartments overlooking Central Park have been listed at up to $70 million, with even larger and more lavish ones currently being built.

The park is 2.5 miles long and half a mile wide, stretching from the edge of Midtown all the way up to Harlem. There are many miles of trails weaving through the various lakes and large green areas on the interior, but most visitors will find the interesting features of the park are mostly concentrated in the southern half.

Central Park South (aka 59th Street) is the southern border and also home to many of New York City’s best hotels. There are subway stops here and nearby, depending on which line you’ll take, but incorporating a Central Park walk on a general walking tour of Midtown is easy to do. It’s free to get enter and just into the southern section you’ll find some of the park’s most famous attractions.

Sporadically there are huge concerts held in Central Park on the Great Lawn near the center. Simon and Garfunkel did a famous reunion concert there and Diana Ross also put on a huge show. There is an outdoor venue in the park called Summerstage, and each summer notable acts play every weekend to large audiences.

The Delacorte Theater is an open-air venue in Central Park that does various stage productions. Usually at least one Shakespeare play runs for two weeks, but other productions – often featuring famous actors – are also on the summer schedule.

Central Park had and deserved a reputation for being dangerous – especially after dark – for several decades, but fortunately things have changed. Robberies (and worse) are now quite rare, but obviously caution should be taken. The park is open and accessible 24 hours a day so there is no telling what can happen in the dark corners in the wee hours. When you get there you’ll see that the well-lit paths near the 59th Street entrances are busy and pleasant on most evenings.