Celebrate the Fourth of July in New York 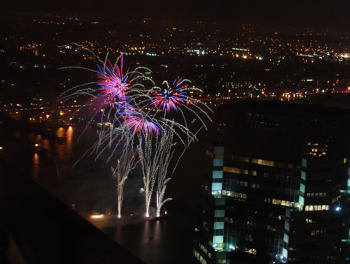 New York may not be the capital of the US, but it is the largest city in the country, and the one that most often comes to mind as representative of the United States as a whole. It’s big and busy, a true melting pot of cultures and cuisines, of immigrants from around the world, of the richest of the rich and those struggling to survive. It’s a microcosm of America, so what better place to celebrate America’s Independence Day than in its favorite city, New York.

New York is one of the best places to go for Independence Day for several reasons, including the fact that the city hosts the largest 4th of July fireworks display in the country. Because New York is such a large city and a main transportation hub for the US, it’s generally easy to find cheap tickets to New York from any other medium to large-sized city in the US, and from most major cities around the world. New York has three large airports and can be accessed by bus and train as well, and all that competition helps drive the cost of getting here down.

When it comes to hotels though, you aren’t as lucky. The Big Apple is expensive at most times of the year and around Independence Day is no exception. Finding cheap hotels in New York is difficult, but not impossible. You may have to dig a little deeper, but book in advance and keep your eyes open for deals, and you’ll be able to find something that fits your needs and price range.

New York City is as “all-American” as it gets. From hot dogs and pizza to the Statue of Liberty, Central Park, and the Museum of Modern Art, the city is home to the some of the best the US has to offer and is a great destination for celebrating the birth of the nation.