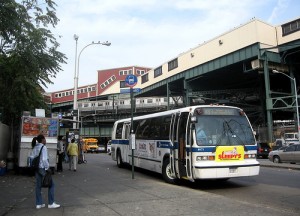 New York is a major transportation hub and is served by three major airports. With so many cheap flights to New York , travelers shouldn’t have a problem getting here. And when it comes to handling the public transport in New York, there are a lot of options for any traveler.

If you are on a tight budget, choosing to travel by bus – both to and within the city – makes an excellent alternative. The bus schedule is frequent and you can be flexible with your travel plans. Plus you don’t need to worry about how to get from the airport to the city, as buses stop directly in the city.

New York’s bus system is efficient and reliable. However, traffic can delay the buses and it takes longer than flying. The bathroom facilities are limited and there is no food service available (but you can bring your own food and drinks).

Bus travel within the USA is definitely a cheaper alternative to train travel. Many buses offer wi-fi, outlets and even basic business like facilities. Buses serve New York City and its suburbs, as well as all towns on the east coast.

There are direct connections from New Jersey, Boston (4.5 hours), Philadelphia, Baltimore, Washington DC , as well as from smaller cities. Depending on the company you choose, a trip from Philadelphia to New York costs up to $20 (but if you book online it can be as cheap as $1 one way).

There are direct bus links from Canada, as well. Megabus and NeON (operated by Greyhound) offer service from Toronto.

Please note that you might be asked to show a photo ID when you board a bus. Make sure to arrive at the bus station early, even if you booked the ticket online. You cannot reserve a specific seat regardless of where you get the ticket from. Some bus companies limit the amount of luggage you can bring so make sure to ask the company before you make any plans.

Getting within New York by Bus

Bus lines are identified by letters – which indicate the borough in which the line mostly operates – followed by numbers. Together they make up the route. At each bus stop you can see which buses stop there. Make sure to buy or print a map for each borough (you can find them on the MTA website ). The fare for a local bus ride is $2.25 (or $2.50 for a SingleRide ticket sold at vending machines only).

Express buses connect Manhattan to the outer boroughs, usually where the subway doesn’t operate. The flat fare is $5.50. Some north-south buses are marked “Limited”, which means they only stop at major cross streets. They are similar to express buses but are cheap ($2.25).

Bus fare boxes accept coins (except for pennies and half-dollar) as well as MetroCards. Use exact fare as change is not given. The MetroCard is accepted on MTA New York City Transit subways, local buses, and express buses.

The +Select Bus Service+ is similar to the “Limited” buses but they use different bus stops and a different payment method. The fare is also $2.25 but you have to buy the ticket from the machines located at the bus stops.