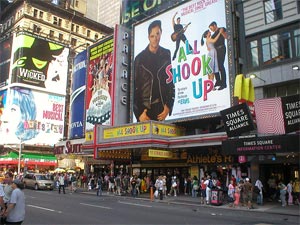 Most “Broadway” shows are presented in theaters in the general Times Square neighborhood, although only 4 of the 39 “Broadway” theaters are actually on the street called Broadway. This is a huge part of the New York City tourism scene, and seeing at least one play or musical in the area can be a great idea even for those of us who are not traditional theater fans.

Tickets have been going way up in price in recent years, but there are a few ways to get cheaper tickets, even at the last minute, although normally only for the less-popular shows of the moment. The prime seats now can have a face value of well over $100 each, however it’s usually possible to get a seat for something less popular for close to $20 at the TKTS office (described below). These shows are quite a spectacle, and even those who mock them should at least make a point of seeing one once in order to validate their future mocking.

Some quick definitions before we go on:

Most all Broadway shows operate on exactly the same schedule, with 8 performances per week. Obviously you’ll want to check on the ones you are interested in to confirm.

You can buy tickets for all Broadway shows by telephone or online in advance, as well as from each theater’s box office all the way up to show time. Of course, the most popular shows can be sold out for weeks in advance, but occasionally they release seats on the day of the show, even for the big hits.

Nearly all Broadway and Off-Broadway tickets are sold online through Telecharge and Ticketmaster.

An outfit called the Theatre Development Fund has been running booths called TKTS since 1973 as a way to fill seats for performances that might otherwise go unfilled. There are two TKTS offices:

These booths accept cash and traveler’s checks, but no credit cards. Outside you’ll see a list of all the shows they have tickets available for, which they offer at discounts of between 10 and 50% for that day’s shows only, or for the following day’s matinee at the Southstreet Seaport location. Not surprisingly, you’ll normally only see tickets available for the less popular shows at the TKTS booths, but sometimes the hits will have a new block of empty seats available as well. Well over half the shows sell at least some tickets through these booths, so it’s always worthwhile going by.

Other ways of getting tickets

There are dozens of small ticket agencies that deal in Broadway show tickets in addition to concerts and sporting events. Of course, prices tend to be quite high through these agencies, but they do tend to have tickets for the hottest shows, even at the last minute.

There are also scalpers stationed in front of some sold-out theaters. They usually operate discreetly so you might have to look around a bit.

You can also try looking for tickets on Craigslist under the Tickets category. You’ll mostly see sports and concert tickets, but occasionally you’ll see an offer for some cheap tickets by a local who can’t make it that night. If you’ve got computer access while in town, it’s worth a quick look.