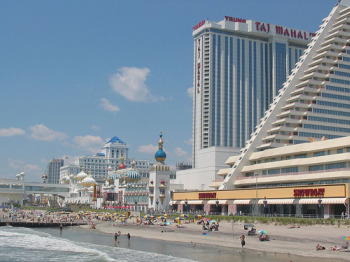 Got a gambling itch that you just can’t get to Vegas to scratch? Head to Atlantic City instead. It’s the only place this side of the Mississippi that offer Vegas-style gambling action, and it’s just 126 miles from New York City, making it an easy add-on or weekend trip from New York. Trains and buses make the jaunt in under three hours and cost less than a few cocktails.

One of the biggest draws of Atlantic City, other than it’s proximity to New York, it its affordability. Cheap hotels in Atlantic City are easy to come by, and frequent Atlantic City deals and discounts and put you in a standard room for well under $100 per night.

Even if you aren’t a gambler, Atlantic City may hold some appeal. As in Vegas, simply wandering around the casino floors, checking out the high rollers, and enjoying a few meals and drinks at the over-the-top casino bars and restaurants is entertainment enough. When you want to get out of the casinos and hotels, head to the Boardwalk, a kitschy throwback to an earlier era, it may have lost some of its original glory, but you can’t help but feel nostalgic as your stroll along the wooden platform and snack on some saltwater taffy.