Atlantic City is an easy side trip from New York 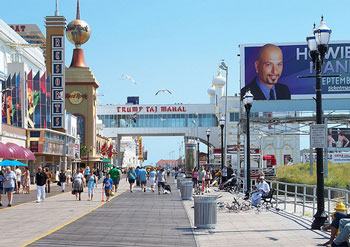 Residents of New York City know this all too well already, but for those coming from out of town it’s worth knowing that Atlantic City, New Jersey is only a couple hours away, and is a worthwhile side trip for many people. Atlantic City, as you may know, is the only city in the eastern United States that has legal Las Vegas-style gambling, and it’s actually quite historic and interesting even for non-gamblers.

More good news comes in the fact that legal Indian-tribe casinos nearly everywhere in the United States have put a big crimp in Atlantic City’s draw, so now prices for things there are far lower than they used to be.

Getting to Atlantic City

If you want to go to Atlantic City before you even stop in New York City, then you’ll probably want to book one of the flights to Newark. There is a small airport in Atlantic City, but flights there are rare and expensive so really Newark is your best bet. If you are starting in NYC already you’ll want to check out our existing article about getting from NY to Atlantic City, which explains all the options and prices, along with directions from Newark Airport itself.

As mentioned above, hotels in Atlantic City are probably cheaper now than they’ve been in at least a decade or two. Thanks partly to the global economic downturn, hotels that used to start over $200 per night during the week for a room are now starting around $80 per night. That’s in a fancy casino hotel on the Boardwalk as well. If you are willing to stay in one of the less glamorous hotels a block or two inland then you can find rooms starting closer to $30 per night. It’s all seasonal, of course, but even during peak summer periods prices are lower than they normally are.

One bit of advice and warning for those who haven’t heard this part, Atlantic City is often cited as an example of how NOT to create a gambling city. In the 1970s the whole town was a cesspool, and legalized gambling proponents said these new laws would clean the whole place up, but in reality it just worked for the famous Boardwalk and a few spots just inland from there, while the rest of the city is still pretty sketchy.

That said, it’s safe and fun as long as you stay in the tourist areas, which you’d want to do anyway. There’s always gambling, of course, and there are many really fancy casinos that rival the better places in Las Vegas, but there’s more to Atlantic City than that.

This was a resort town for the upper classes over 100 years ago, so there is a ton of history and even quite a few existing structures from back then. You have hundreds of small shops and activities located all along the Boardwalk, and the kitchy factor is very high, in a good way. It’s like stepping back in time to see what holidays were like when most people couldn’t go more than 100 miles from home for their vacation. Some might find it hilarious and others might find it just weird, but it’s really entertaining for all.