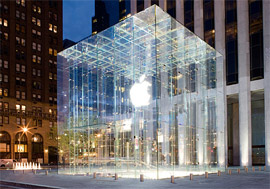 If you are part of the Apple/Macintosh/iPod/iPhone cult, or you are considering joining, you’ll be happy to know that Manhattan has 3 dedicated Apple Stores, and they are all easy to reach for most tourists and travelers. These stores have become tourist attractions unto themselves over the years, in a way that isn’t true for most of the 200+ similar stores around the world.

What is an Apple Store?

If you haven’t had the chance to check one out yet, get ready to be impressed. Just as you might expect, these stores all carry virtually every hardware product that Apple currently makes, as well as tons of software and the most popular accessories like iPhone cases, cables, and just about anything you might need or want that will come in contact with an Apple product. There is almost always an abundance of helpful sales people, so getting your questions answered while browsing couldn’t be easier.

Each store also has what they call a “Genius Bar”, which is basically just their annoying name for their tech help department. The “geniuses” that work at these things tend to be friendly and highly trained, but these things also tend to have long lines nearly all the time, at least in the New York City locations.

All stores also have a series of demonstrations of products and software, as well as occasional readings and other events that aren’t really related to Apple at all. If you are going by any of these places (which you almost certainly will) it’s worth walking in just to check it out, even if you have no intention of buying anything.

Where are the Apple Stores in New York City? 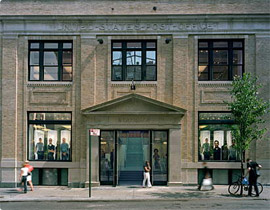 The original NYC Apple Store is tucked into this trendy neighborhood and it’s not easy to spot unless you are specifically looking for it. This is another location where they kept the outside of a historic building (a disused post office in this case) in tact, and built their stylish store around that design. Since tons of celebrities live in this neighborhood, this might be one of the best places in the whole city to see stars, although on any given visit chances are still slim, and it’s always crowded.

The second Apple Store in New York City might be the most famous Apple Store in the world, as well as the most unusual. It’s located beneath a glass cube just off the corner of Fifth Avenue at 59th Street, just across from Central Park. It’s literally always open, as in 24/7/365, and it’s also usually amazingly busy even in the wee hours, although not nearly as busy as it is during the day, when it’s sometimes so jammed that it’s no fun to even try to visit. 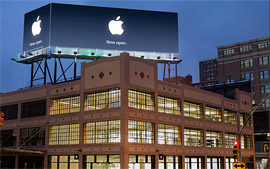 The third Apple Store opened up in December 2007 at the main corner just on the edge of the ultra trendy Meat Packing District. This is yet another artsy area where quite a few famous people live and work in this district, so seeing a star here is fairly common.

North to south they are: